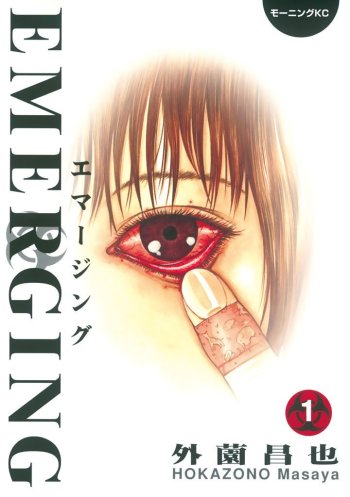 Emerging is one of those manga series that you’re anxious to read, yet repulsed by simultaneously.  It follows the plot of what would happen if a completely brand new virus appeared in Japan’s capital, and that is exactly what happens when a man wanders into a crowd of people and explodes in broad daylight, with blood spraying on multiple people, including a high-school student named Akari with a band-aid on her finger.  The virus has never been seen before, and it has a penchant for eyes.  Blood forces itself out of the human body with the intention of spreading the virus to others, and Japan isn’t prepared for the attack.  Everything is thrown into chaos, with an uncertain number of infected and not enough technology to combat the virus.

This anime is even more thought-provoking with the recent news of the Ebola patients and the near-outbreak.  It reminds us that at any moment, our intricately built societies can fall and crumble with just one infected person that infects others, yet there is always a small shred of hope still lingering in the distance, whether in the form of a person or some other clue.  Emerging tries to tell us that everything can die, but everything can also be saved, or will it be?

Spoiling this manga won’t do any good; the only thing that can be said about it is a question.  Why was it never made into an anime?  If it were made into one, it would supersede many other series on peoples’ lists.  Although some people would be affected by the gore that would have to be incorporated into the series, because viruses and diseases aren’t pretty.  Yet, this knowledge is exactly what keeps us grounded, keeps us knowing that life isn’t always beautiful butterflies and happiness, it also has a very dark and evil side.  Unfortunately, Emerging made never be recreated in animation form.  People like to pretend the darker side of life doesn’t have its lessons, either.

Even the characters developed nicely, although the woman obsessed with viruses was creepy, there are more people like in the world than you’d initially think.  The art was wonderful, and the scenes with gore were drawn with much detail and precision.  In the end, this manga was one of brilliant ideals.  There are no problems in this manga that I'm aware of.

This is one of the first horror manga to give me actual anxiety. The depiction of the virus is incredibly grotesque, I felt like a medieval peasant watching someone die of the black plague. I was on the edge of my seat the entire time I saw someone else get infected. 8/10 would read again.