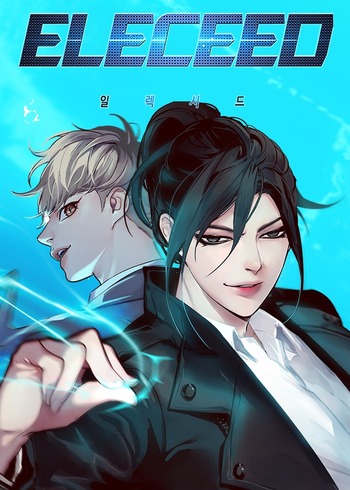 They have completely different story and art, but they are voth so funny and great!

These are two MASTERPIECES that you should read!

i agree. both are excellent. go read em if you still havent. love both.

i appearantly need minimum hundred character to post so sdfygsdyhfgydhgfyhgdyfug

It has a veeery different story but again we encounter someone really powerful. I can guarantee that if you like one of this manhwa you will like the other too. MASTERPIECE.

Both about growth, and nurture. Well being badass funny at the same time. It really shows dedication through the leads life in all aspects, not jut in their abilities. They also stay to their personality throughout everything.

Surprisingly enough nobody still recommended them.

Both are works of same author, but different artists.

They are both funny, have a lot of great fighting scenes, great story in general and of course, similar themes with people who have unique and strong abilities.

While the story lines and premise are completely different, in both the author has included stretches of their daily lives and domesticity in between all the great action scenes. While I love the action, it is the snippets of their lives in between that makes me fall in love with the characters.

I am also sucker for redemption arcs for misguided characters and found families which feature in both.

Male leads who are smart, powerful, have a strong bond and protect e/o. They also make great friends and comrades along their journey.

Action-packed. Lots of one on one fight scenes with great depiction (although in this regard, Noblesse is superior imo) between individuals of various organizations.

Master spy Twilight is the best at what he does when it comes to going undercover on dangerous missions in the name of a better world. But when he receives the ultimate impossible assignment—get married and have a kid—he may finally be in over his head! Not one to depend on others, Twilight has his work cut out for him procuring both a wife and a child for his mission to infiltrate an elite private school. What he doesn’t know is that the wife he’s chosen is an assassin and the child he’s adopted is a telepath!

Both of these are hilarious wholesome fun, with a lot of the joke set ups in each leaning on the fact that the main characters have secret identities that the others are unaware of. Both effectively mix action and comedy, moving from cheering for your favourite character to laughing at their antics. They also have some of the best side eye and comical facial expressions around.

Spy X family is set in a cold war era Germany styled universe, where master spy Twilight must undergo a deep undercover mission to learn enemy secrets and prevent catastrophe. Todo so, he will need to infiltrate a private school for the elite. To do so, he'll need a wife (Yor, a famous assassin) and child (Anya, a telepath) to pull the ruse off. Only Anya is aware of each of her new parents identities, leaving Twilight and Yor to muddle along, trying to keep their other lives a secret.

Eleceed is about a lonely boy call Jiwoo who constantly needs to move so that others don't discover he has secret powers. As a result, he lives in fear of discovery and his friends are mostly the stray cats in the neighbourhood that he feeds. Enter Kayden, a powerful awaken one (person with powers) who transforms into a fat ginger cat to escape a rough situation. Rescued by Jiwoo, Kayden explains that Jiwoo isn't alone, and beings guiding him through life as an awakened one, while everyone else is oblivious to this rotund op cat's true identity as one of the most powerful awaken around. This series really starts to hit it's stride after more of the characters are introduced, so if it seems a little slow/action heavy at the start I recommend sticking with it, it's really worth it.

Seriously, both of these have had me in tears of laughter, highly recommend giving them both a go.

Shi-Woon is desperate. He's constantly bullied and getting beat up at school by a gang of thugs, and is on the verge of suicide. Sick of being weak and helpless, the boy turns to the only person he knows who can help: Chun-Woo, a powerful martial artist and also his new teacher.  But Chun-Woo won't take Shi-Woon under his wing so easily, and little does the teenager know about how his would-be mentor acquired his fighting talents...

I've seen all these recommendations go towards the shape-shifted cat side of the WEBTOON, but rarely ever going to towards the action/godly teacher side. Eleceed reminded me of The Breaker almost right away. I won't go to much into the story, but the mc basically gains a martial arts teacher that helps him fend off against the bullies that have been terrorizing him for years. If you end up enjoying it, there's a completed sequel by the name of The Breaker: New Waves with nearly 3 times the amount of chapters of the first! There's still much more to the story, but sadly, it hasn't been picked up by the author for abt 4-5 years now. It's definitely a gem that you will surely love if you liked that side of Eleceed.

They're both about seemingly normal but sweet kids getting super strong and having epic fights.

The main correlations though are the cute relationships with their mentors, both of which are unfairly fine, and the overall great bromance in both.

I'd say that breaker is significantly more intense than Elceed but if you like one you're very likely to like the other.

And finally the FIGHT SCENES ARE AMAZING in both. like I'm a very casual shounen reader but by golly are they impressive.

Girls of the Wild's

Wild's High has a 42-year history as a fighting specialized, girls only, private high school meant solely for the elite. It is also the place that Wild's-League is held: the most popular event in the country and the only place in the world where teenage girls have brutal fights with their lives on the line. One year the school changed from a girls only school to a mixed gender school. The only male student, Song Jae Gu, has been granted a full 3-year scholarship regardless of grades. Being someone who had to spend every moment either working or taking care of his younger brother and sister, he accepted. But after meeting Queen, the bloody champion of Wild's-League, drenching her in coffee, calling her a monster, and getting caught seeing her while she was taking a shower... his scholarship could prove fatal.

Well, it´s from one of the authors of Eleceed. It´s a little different, but the chemistry between the caracters feels the same. Just go check it out, and see if you like it!

I read this manga because I really liked Girls Of The Wilds. Zhena worked both on these manga. I highly recommend both of these.

Well, the character development is very different, the journey the leads take is similar. Also, the development of the surroundings for the leads is very similar. Lastly, whole Solo Leveling is not obviously funny, it does have its moments.

Same type of story, boy is weak then becomes strong. It's a must read for people who love power fantasy with strong mc!

I would say they are different.

The similarities would probably be those abilities/powers that you can see in both works and the fact that they both live in an isolated/different world in a way.

These are two MASTERPIECES!

Well-known fighters are all here at the national competition to find out who is the best fighter, but a mysterious group, called “Nox Solidarity”, comes and tries to make a mess. Now, who is going to fight with Mori and his friends against Nox?

Both are really funny and have a lot of fighting scenes!

They are really well written and beautifuly drawn!

The art styles are different and really nicez they are clean and easy to see, follow and read!

In one they have abilities and in the other one they are mages, but the basic plot is similar.

They are funny, beautiful and have really well written stories!

When vampires destroy her chance to have the normal life she’s always wanted, Hayan is forced to draw on her darkest secret to rid the world of the merciless hunters that took it over 10 years ago. With the support of a rising star in the local police force, Hayan steps up to protect her loved ones, face her past, and get her revenge.

Great stories about people with special abilities - vampires in the other one.

The art is gorgeous, character development is great and stories are complex!