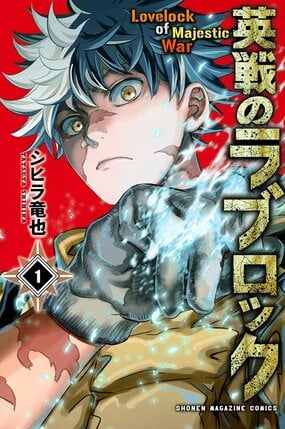 198 users are tracking this. Log in to see stats.

Lovelock of Majestic War was a dark superhero shounen that came out in 2021. The series is a take on what if the super heroes we looked up to weren't heroic but were in fact villains. This concept has of course been done with The Boys, a live action superhero series being supervised by Eric Kripke, the creator of the Supernatural series. Looking back when I read the first few chapters I actually felt optimistic about the series, since I've always had a preference for dark manga/anime. But there comes a time where even I will say that this was too much. So here are my thoughts on a series that only lasted four volumes, plus whatever I gleaned from the raws. SPOILERS ALERT since this will be covering story points. Story- The story begins with our protagonist Hiiro Sorano being a grunt worker cleaning up after messes the superheroes make. Compared to his twin brother, Ao Sorano, who has become a super hero with fire powers, the protagonist's current life is kind of depressing. The story begins to pick up when Iruka tries to apply to Harvest, a superhero agency. But it turns out that Harvest has been doing shady stuff, experimenting on people to create superhumans, by any means necessary. Superhumans in this world are created two ways: dying and coming back with superpowers(if you had the potential). Or sexual reproduction with someone with superpowers. And then comes the more troubling part of the first chapter, where this edgy version of All-Might from My Hero Academia, actually tries to take advantage of Iruka. Now I'm no stranger to attempted sexual assault, not since growing up with Claymore and other shounens. But to put something like that in the very first chapter convinces me that either the author was pushing the story too quickly, or he was trying to make the antagonist look as villainous as possible. Then again, the author did write hentai, so maybe he himself didn't think it was too much. https://www.mangaupdates.com/authors.html?id=7060&orderby=year Now I'm not saying that writing hentai is a bad thing, since it does give experience to authors. That's what happened with the author of Black Lagoon. And then we have authors who have written hentai for so long that their habits and fetishes leak into their non-hentai works in a bad way. That is what I believed happen to the author of Dance in the Vampire Bund. Not to get too off-track but yes, Iruka escapes and after some events Hiiro himself gains superpowers, one from a near death experience, and then that weird situation with his brother. At the very least the second chapter tries to end on a hopeful note. Then you're probably wondering if the series gets any better, but it doesn't. The series has the audacity to end on a cliff-hanger, and then there is the problem with some of the characters, which I'll be getting to. Art- The art is actually pretty decent, with the characters looking normal and not some over-designed crap you tend to see in other series. So I guess the author got his fair share of practice drawing all those hentai. That being said, there's gore and nudity as a heads-up to those who are screamish with those story elements. Characters- Here we go, this right here is the reason why the series didn't last as long as it did. Hiiro joins a group of vigilante heroes who want to change the status quo with the self-serving heroes. The problem is that the author made it a choice to focus only on male characters in the main cast. You are hardly going to see any action with the female characters, and Iruka doesn't get any superpowers. She's just there as a love-interest and a damsel in distress. What's even worse is that there is a mosquito superhuman who preys on young women. Why the author chose to include a disgusting villain is beyond me, but if you ask me, it probably has to do with the fact that he did hentai. Yachiyo, one of the main male characters, looks like Levi from Attack on Titan, but if I had to compare the two, Levi is the more nostalgic character to me. Hiiro has this sense of strong resolve to his character. He wants to change the world so his love-interest can live in peace, which is admirable. I do think the protector protagonist has been done to death a lot though, and since the series was cut short, no more is explored with his character. I need more from a protagonist character besides the fact that he/she is strong. Overall- The series had potential with its concept, but the author or his editor(or both) somehow managed to fuck the series into the dirt. We live in a modern era of shounen manga, where involving female characters more has become a bigger deal. Cause let's be honest, who wants to sit through a shounen where the only female characters are on the sidelines. Its boring and outdated, plus the male main characters weren't enough to keep readers interested. Recommendations: Psyren