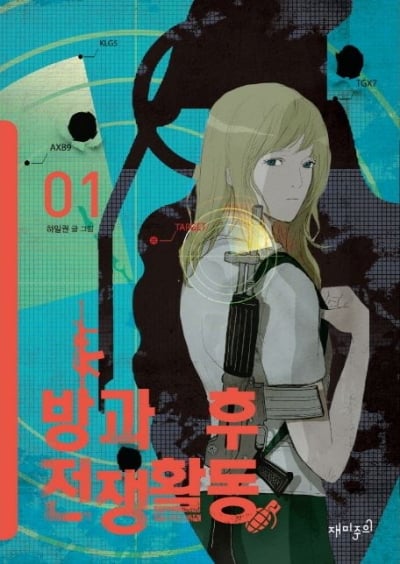 What would you do if your school's extracurricular activity was a military service a midst actual war? A class of students are turned into platoons of soldiers in a war against unknown, possibly alien, slime-like objects.

To quote Private Joker’s last line in “Full Metal Jacket” directed by Stanley Kubrick: “My thoughts drift back to erect nipple wet dreams about Mary Jane Rotencrotch and the Great Homecoming F*ck fantasy. I’m so happy that I’m alive, in one piece and short. I’m in a world of sh*t, yes. But I’m alive. And I am not afraid.” “Duty After School” is an anti-war manhwa, where I love to say this as an anti-war, about a group of high school students have to reserve to a battleground against the unidentified creatures. These unidentified creatures are purple orbs-like, different from slime, where they have the same brain as humans but have a thorn. They are able to kill humans quickly with just their giant thorns in their bodies. They aren’t against humans, aren’t against terrorists, but they are against something that readers don’t know what they really are. It just drags them long and long with more dangerous situations. At first, they all didn’t accept why they had to go into battle. However, the time has come, an apocalypse. They realize that this war is nothing but not against humans in general. As long as they get along while seeing many of their friends die, they just realize that this is still not much. They have to deal with themselves, the psychology within themselves until stab each other in the back. I love “Annarasumanara” and when I finish reading, I want to find another Ha Il-kwon works. I mean, I just realized that this is the same writer who also wrote “God of Bath”. Well-played but “Duty After School” is darker than any both works I’ve read from the author. The fact that it’s hard to find war manga (I’m talking about reality), applies also to anime and manga, is just makes me crazy. But, I really, really expect a lot from this manhwa. Apparently, Il-kwon fulfilled my expectations and maybe this is one of the best. I can take you from an hour, I can say a lot about this manhwa for a day, I want to find more similar works to this. I can combine every anti-war movie I’ve watched such as “The Deer Hunter“, “Apocalypse Now”, “Platoon”, “Full Metal Jacket”, and “Jarhead“. But, there is one thing I was speechless when I finished reading this manhwa and that’s the ending. The ending reminds me of “Come and See” where both of them end tragically in self-awareness. The main characters were aware of what they have witnessed. And I’m still thinking about it, I can’t get rid of that image anymore even though I’m trying to find another Webtoon; especially comedy. “Duty After School” starts with this bunch of high schools, talks about their future and their dream of universities after graduation. Then, it straightforward with this documentary format where one character interviews each character. There is no main character because it doesn’t just focus on one character. There is so many to recognize. The story tells through this documentary, each character tells how they felt when they went through training, killed their first cells, and watched their friend die. Each character has its own characterization, issue, and plot where it connects to the entire setting: the war. There is so much jarring where I can’t see it in several chapters. You sometimes get other sub-plots too like romance but it adds many subtle hints, foreshadowing, and irony into the story. You have to get used to the environment, characters, and experience to get to know them all. The only way was just to keep going, push yourselves, and you start to kind of notice it one by one. It’s hard to say that this is an action whatsoever. Wrong, even though you got a little action, but this is not the case. “Duty After School” is a character study, similar to “The Deer Hunter”. Both of them show three separate events namely before the war, the war, and the post-war. I don’t care where these cells came from because this is not a survival game story or Independence Day-alike. I also like how the author depicts all these characters from their perspective. The author uses high school students as the scapegoat in a realistic way. Every character changes and is impossible if nothing changes or develops. You got this innocent guy who seems just fun but he just witnessed the beginning. There is a plot about a misunderstanding where the character gradually changes into a psycho and tries to kill his friends. There are plots about suicide and other twists. Just hard to recognize all of them at first and the art is still one of the author trademarks. At first, most of the interview scene doesn’t show the name of each character. But, I like that the author seems to notice it. The art is black and white, similar to “Annarasumanara”, for some neutral design characters, but it adds random details into its background and so on. “Duty After School” is an anti-war manhwa about character study, psychology, with so many interactions and connections between characters. It deals with pain, reality, personal feeling, real life, and many more. The art is great but a little bit messy, the tone is dark, everything in this manhwa is dark. I really like how this manhwa doesn’t end with a happy ending and I love that. But, this is not for everyone. I guess.

So, a bunch of students are drafted into the military. Its really dark. Very dark. So dark that there is no future. Who will survive? and all that. Read this if you like depressing stories. It will make you like the characters and then punch you in the face. There are deaths, and the author pulls no punches. The art is a bit weird, and there were often times when I didn't like it. Not the best I've seen, however the story and characters are really gripping, so even with that it will suck you in and keep you.