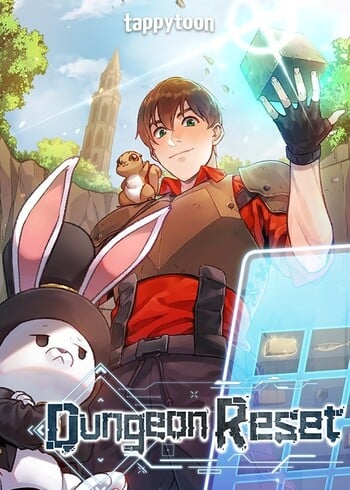 Yeon-woo had a twin brother who disappeared five years ago. One day, a pocket watch left by his brother returned to his possession. Inside, he found a hidden diary in which was recorded "By the time you hear this, I guess I will be already dead…."

Both go into a new world with magic-like skills. They both get good skills. Great art on Both with their webtoon style. Both kinda 'playing' solo. Both rewarded by the system for their work.

They're different in that in one ML doesn't want to take revenge and in the other he wants revenge for his brother. They're both pretty badass and while in dungeon reset, he has an easier life while facing hurdles, second life ranker is more creative.

Similar systems and vibes throughout the story. Both stories are pretty well executed and enjoyable and I would definitely recommend both of these stories to someone, let alone to someone who had read one and not the other.

Both of them are in the same spirit, even though the plots are really different, if you liked one, you'll almost certainly like the other one

Both have game-like mechanics. Both get rewarded by the system for accomplishing things. Both have interactions with their minions. Both have good webtoon art.

While somepeople say that they are basicaly the same thing i feel that dungeon reset is more goal oreitated and from the near start we know th goal and fucusses alot on comedy and is not to be taken too serously, and that Solo leveling leaves a lot more mystery and is a bit more realistc.

it has the same feel, and it focuses on one main character that works hard and struggles to become stronger and they are both great.

both go from weak to strong (and if u like good quality and in full colour it has both and has some time were the main character doesn't see why people can't do what he does, and similar concept very enjoyable you should read

11-year-old Jung Si-woo never had any friends, because there was nothing interesting about him. He lived an average life as an average person in an average world. But suddenly, the earth faced a great change when Mysterious floating 'Sky Castles' appeared. The 'Sky Castles' granted some people wings and powers, but unfortunately, Si-woo wasn't one of them.

both dungeon themed, easy enjoyable reads similar artwork and both MC have a similar vibe...and some humour in both

Caught up on both and they both are amazing. They both have a similar feel to them wheile you read, and they always keep me on the edge.

Both have a similar feel with a MC grinding thire game like power a bit light comedy and exploring what they can do.

both have an action element and have the same sense of comidy. both contain action and an over powered protaganist.

-ML started off weak and will eventually be the strongest

On his way home from his office, the main protagonist drove and ran over a big dog. At that moment, he heard the sudden sound of a voice inside his head. "The monster has been subjugated, gaining experience points." Before anyone knew, the world has changed. Monsters appear, this is a game-like world where levels, skills, and status exist. This is an adventure where the modern world becomes fantasy and where the main protagonist has to strive hard for his survival.

the survival elements in these manga I believe is what make them compelling for that reason I think if you read one you would most likely enjoy the other.

15 contestants compete in a survival game as they work on upgrading the dungeon altogether. Who will be the one to claim it all?

Dungeon Sherpa, a general term for those who make a living by carrying the baggage of adventurers while leading the way for them in their search through labyrinths. Rou is a young but skilled sherpa whose activities are based in Tairos Labyrinth. Although Rou lost his father half a year ago and works to support his younger sister who he lives with, he is forcibly dragged into helping the hero who made a name for herself at the royal capital as the "Twilight Blade."

Clear all the dungeons! There are 666 of them and 10 years to do it. If not, the only thing that awaits...is total annihilation. Ezoe Kazuhiko suddenly finds a mysterious underground space in his yard. When he steps into what turns out to be the very first dungeon in this world, he ends up activating the Dungeon System and learns from the mysterious beauty who appears to him, Akane, that the world is doomed to destruction if the 666 total dungeons that will be appearing in this world are not all cleared within 10 years.