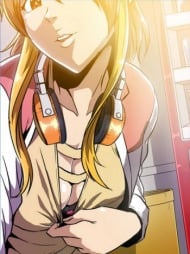 Reassigned and demoted at work. Add to that a broken marriage and Seunggu's life is at an all time low. But along comes a smart and sassy girl by the name of Yura. Hard to resist and with no desire to resist, Seunggu slowly becomes addicted to the drug called Han Yura.

Drug Candy is a borderline-H manhwa that's been serialized in Lezhin. If you didn't know this, Lezhin is fap central so, if you're here for the plot, you're doing it wrong. BUT, Drug Candy is not only about sex and, if you're an emotional person that gets easily attached to characters, you're going to spend 90% of the time angry or facepalming, or even yelling. Want to know why? Read it and you'll understand. Plus/minus considerations: STORY: our protagonist is going through a terrible period and not only his marriage is deteriorating, but he also gets demoted from his job. Suddenly, a young girl appears and she'll be the key to change his life. Now the right question is: in positive or negative? You give me the answer. I feel like this manga had a good potential to develope a better story, but I don't think the story itself was the problem here: this manhwa started off as normal fap material that happened to have a dramatic background story that worked, because it's possible! Everything you see in this manga is plausible and if you are in a relationship (fiancée or even married) you feel bad for what's going on up in this. But then the flaws? It hurts to say this, especially if it's me.. but there's too much sex. Sex scenes are logorating and way too recurrent in my eyes, taking away from the story, that is actually not bad. I liked the ending quite a lot. (+) ART: Lezhin sure knows how to treat their viewers. Full color panels everytime, all the time (take this, manga!) and the art style looks great. Also if you know me, I always feel like I need to praise people that draw nipples in HD like that (I kid, I kid). Jokes aside, I really like how the characters look and for the sex scenes, well, they look great too :megusta: (++) CHARACTERS: now this is the controversial part, because I said I liked the background story and the reason is that these characters make it possible. I feel like even the secondary characters are enjoyable in this: they all have their stories, their reactions, their reasons. I empathise with all of them but one: the male lead. I'm sorry, but he's a fucking idiot, I can't stand dense characters like him. Realistically speaking, with an intelligent person as a main character I wouldn't say this would've never happened, but the problem would've been solved in 1/3 of the time, but NO! He's gotta be stupid and behave like one! Ahhh he makes my blood boil again. Now you would say that "if the author makes you feel something, he's done his job": no, fuck this character. The two other main girls in this (wife and extra) are quite the package and I love everything they do because it makes everything even more realistic. (+) This was one of my first Lezhin comics and I thought it was enjoyable. It gets better and better the more it goes and, as I said a couple of times already, everything you see is plausible and could really happen in real life. I hope you feel what I felt reading this (mostly anger), don't judge it only by the amount of sex scenes you see.

please dont be shocked to see this awaful rating the story is good and as Lezhin is known for its full painted comic but what most of the readers will hate is the most painful and crazy ending ever.

I am honestly in love with this manga and have been keeping up with it for some time, hoping that they make an anime. I hate romances, hentais, etc. But this is actually good. Also, when you get to the end, read past the page that reads "The End". There is a surprise ending to it. If you don't, you will hate the ending.