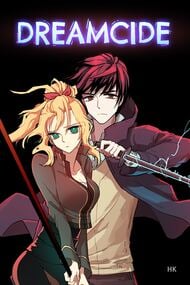 Hazin Nam had always been plagued by nightmares, but one day, he dreams of an apocalyptic world seven years in the future where humans are fighting to survive among demons and zombies. Hazin dismisses the dream as another nightmare until he finds out Yuri Hong, the girl he had seen in his dream, has transferred into his school... With his ability to switch back and forth between his school life and the oncoming apocalypse, will Hazin be able to prevent what causes the world’s destruction?

I really like the story line in Dreamcide, but for me it's really Yuri Hong. She's so attractive and pretty, the art really gives her good proportions in addition with the protagonist and the other characters. The english translation is only up to chapter 143, and the manghwa isn't really that popular, but I love it. This is definitely one of my favorite ones, probably top 3 next to Solo Leveling and The Gamer. If you want a smoking hot heroine who is really pure and innocent(as well as strong), this is the manga for you.

It's a good read. The zombie aspect is much more believable, with a worldwide collapse of government actually being likely, and the origin being doubtful but as realistic as any other zombie plot. The story... it starts off quite week, I dropped it for a year because I didn't like the first few chapters, but the story does develope rapidly.  The art is unique. I wouldn't say it's bad, but it's not quite the standard of good, so 6/10 it is. I does highlight characters well, but overall it feels empty. It could definitely do with more detail, but the lack of color isn't a bad thing. The characters are good, not exemplary but they don't have to be. I don't think their psychology was underexaggerated or overexaggerated. Overall, it's a good read if you've exhausted the most popular books.