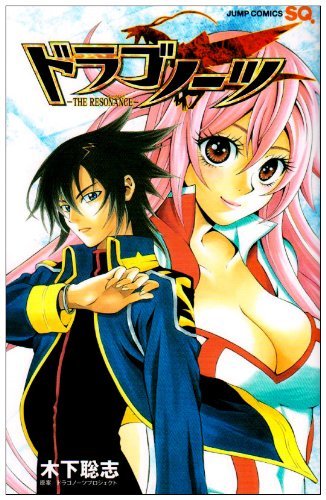 A newly ordained priest named Theo Camming visits a rural town somewhere in Germany. However, his congregation gets attacked by Demoniacs and some of them had been humans. After being wounded, a female Blassreiter fighter arrives to save him and the rest of the village. However, she finds out that the priest was about to die.

Straightforward and innocent Hisone Amakasu is a Self-Defense Force rookie stationed at the Air Self-Defense Force's Gifu Base. She was struggling with the fact that she sometimes hurts people unintentionally by her innocent words and decided to join the Air Self-Defence Force, hoping to maintain a certain distance from people. This decision led her to a fateful encounter which profoundly changed her life. It was the "OTF" dragon hidden in the base and it chose Hisone as his pilot. When it soared into the sky with Hisone, her fate as a dragon pilot was decided. It is said that dragons have a key to the future of the world…

In this stunning twist on the tale of Code Geass, this alternative reality manga series supposes the following question: What if Nunnally had acquired the Geass power instead of her brother Lelouch? In the aftermath of becoming one with the doll-like energy form "Nemo," Nunnally becomes pilot of the Knightmare frame Mark Nemo and engages in a violent battle with the forces of Britannia. But this is only the beginning of Nunnally's nightmare...

After suffering numerous interstellar wars, mankind has finally formed an interstellar union. However there are still many disputes and wars occurring amongst the members of the union itself. In order to resolve these problems, a secret organization, known as GOTT, is formed. They employ agents with special powers to fight for the organization. Agents Eclair and Lumiere are two girls with outstanding abilities, and they are assigned as partners. Together, they fight, and slowly uncover more and more about the secret of the organization that they work for.

Tate Yuuichi has just transferred to Fuka Academy and is thrilled at the prospect of living in a normal co-ed environment. Little did he know that he enrolled in a school where all-out battles between female students are nothing out of the ordinary! On his first day Tate unwittingly stumbles into the middle of a fight between Mai and Natsuki – two of the ‘HIMEs’, a group of specially selected and powerful girls recruited to fight monsters known as Orphans. While the HIMEs themselves are strong, they can only unlock their true power when they partner up with their ‘Key’. Unluckily for Tate he finds that he is not only the Key for Mai but also Natsuki! Now Tate is entering a world of monsters, battles and even rival HIME groups, but that’s only the start of his troubles…

After establishing contact with extraterrestrial civilizations, it was found that humans were the only race to develop various sports. The number of alien sports fans grew dramatically, and the most fanatic of them regularly harass stadiums by taking part in a game, or by demanding a good show, etc. Finally, a treaty was settled, ruling all interferences towards other planets' cultures illegal. Rabbit Force, a group of rabbit-themed henshin girls, became responsible for enforcing the treaty and capturing any offenders.