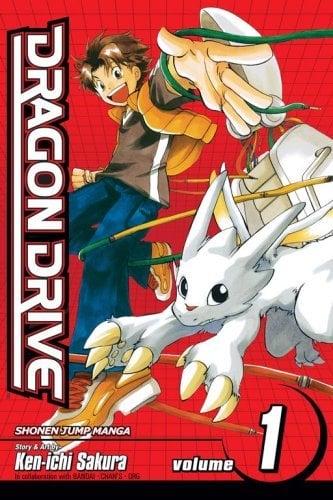 What if scientists discovered that mythical creatures like mermaids, dragons and werewolves actually did exist? Better yet, what if any kid could train them to compete in the ultimate role-playing game? Welcome to the world of Legendz, where master trainer Ken Kazaki and his loyal Windragon are about to turn fantasy into reality!

Both of these mangas are about a game which revolves around dueling with virtual monsters, yet in both stories the monsters turn out to be more than just virtual creatures. Additionally, both series feature some big company with dark designs, who try to use the creatures to their own ends. Lastly, there is a very close resemblance in the artwork as well. These two series have so many similarities that you would swear they were actually 2 parts of the same series.

They both revolve around kids and virtual dragons/mythical creatures and have similar plot lines. If you liked one, you'd definitely like the other.

Misaki Suzuhara is a young girl who traveled to Tokyo to live with a relative, but ended up becoming involved in the greatest game of all time: Angelic Layer! In this fast-paced competition, players customize dolls and fight them in arenas of all sizes, hoping to gain experience and perhaps win the greatest tournament of them all! With new friends to meet and new enemies to defeat, the best time of Misaki's life seems to be just beginning. Join Misaki as she struggles to be the best, even in the face of overwhelming odds.

It may seem a bit strange to tie dragons and angels together, but in both Angelic Layer and Dragon Drive, the main character is determined to succeed, no matter the cost. These kids start out playing a game and get really absorbed into it. As time passes, they make names for themselves by meeting every challenge head on.

In the year 200X, the cyber network has spread to the four corners of the planet. Internet activities are supported by characters called NetNavis who reside inside an electronic device, and their users are known as NetOps. Lan Hikari is a young boy who chooses to battle his NetNavi known as MegaMan against others. With his exceptional skills, the Cybernet Criminal Investigations Department takes an interest in Lan and grants him a special license to battle the forces of evil that threaten DenTech City. Together, Lan and MegaMan will fight together to put a stop to the dark organization World Three and other nefarious foes that lurk in the Undernet!

In both of these mangas, kids start playing a game that turns into much more. Each kid has a partner that they use to fight other teams- in one manga, it's personal programs that interact with the net for them, and in the other, it's a dragon with unique attacks. If you liked one, you should check out the other too.

The Dungeon of Black Company

Kinji had it made–a swank apartment, a real estate empire, and enough cash to lounge around living the good life. After a freak magical accident, he washes up in another world, all but enslaved to a crooked corporation. In a fantastical land where money is everything, there’s only one way for an Earthling to get ahead: make your fortune, by any means necessary! Dragons, goblins, and the occasional dubious potion won’t stop Kinji’s quest for the world’s biggest bank account. The Black Company is open for business!

A gate appears in Tokyo's Ginza district sometime in the 21st century. From the gate pours out monsters, knights from middle-age Europe, and other fantasy-like beings, and they kill many of the citizens of Tokyo. This event is known as the Ginza Incident. The government sends a small group of soldiers from the Japanese Self-Defense Forces to the alternate world beyond the gate. Led by otaku soldier Youji, they find that the villages in the world are being attacked by a dragon. An elf girl who is a survivor from the dragon's rampage joins the group in their travels across the dangerous new world.

I'm Miko, a young woman who was summoned to another world as an experiment. Having been granted the ability to communicate with magical beasts, I was given the duty of expelling the ultimate human-hating dragon (which is the final boss) from the forest... Wait, that's completely absurd! But in order to get the cold-hearted dragon to open up to me, I try to get along with the beast by being friendly and talking with him -- only to have him say "your voice really soothes me for some reason, Miko" and have him become more and more overprotective of me...?!

In a world full of magic, Lynn, who got isekai-ed, obtained the cheat – the Dragon Ranch. Lynn relied on the power obtained by raising dragons, so I started to raise dragons diligently. Fire Dragon, Earth Dragon, Ice Dragon, Steel Dragon… Dark Dragon, Bright Dragon. many years later to enter the Holy Iris Academy to learn magic. He wanted to hide his strength and develop wretchedly, but he always encountered all kinds of difficulties and had to show his amazing ability. Accept as a direct disciple, become an unparalleled powerhouse, and find the truth of this world…