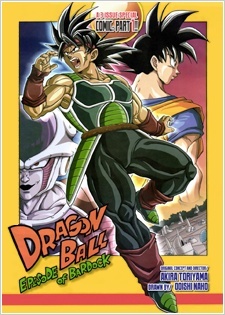 So, Bardock goes back in time to when the planet Vegeta was called Plant and ends up being the source of the legend about Super Saiyans, so that's sorta neat I guess. It definitely raises some questions about the origins of Saiyans in general and about how Bardock's life continued after that point, and it's unfortunate that this series doesn't try to get into that. Instead of simply being "sorta neat," this could've been expanded into something potentially much more epic. But I guess it is what it is.

Bardock fights an ancestor of Frieza called Chilled. Chilled's body looks like a toddler with a chubby little belly, but not in a cute way. And Chilled's vileness is stupidly exaggerated, making fem nothing but a cardstock villain. Though if I remember right, I think quite a few of the villains in the original Dragon Ball and Dragon Ball Z stories had a similar problem. The art feels like a lesser version of the art from the main series, though I may be remembering that art through a rose-tinted lens.