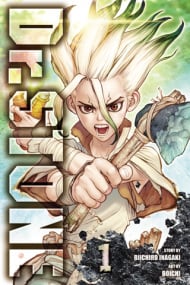 One fateful day, all of humanity was petrified by a blinding flash of light. After several millennia, high schooler Taiju awakens and finds himself lost in a world of statues. However, he's not alone! His science-loving friend Senku's been up and running for a few months and he's got a grand plan in mind—to kickstart civilization with the power of science!

Story- This story is quite unique. It's pretty original, and pretty strange. The characters are in a post-apocalypse, yet, at the same time, all of humanity is still alive. Just in a state where they can't do anything. It's also an "in a strange world" story, yet they're actually in the same world they started in. Oddly, it's a story about the world becoming pretty much just one big jungle over the course of 3,700 years, since humanities been statued. It's the story of one person trying to bring the world back from stone age to modern age again. Characters- The first person we see in the manga, who we assume is the main character (taiju) is actually only in the manga for a few chapters, and is reintroduced like 40 something chapters later. Not a spoiler, since we're pretty much just waiting to see him again, since we assumed he was the main character. The actual main character is Senkuu. A teenager who's love for science has taken over his life since childhood. He is a genius when it comes to chemistry and other sciences, because he's memorized so many books and done so many experiments in his previous life before being awakened in the stone world.  There is also an antagonist. This character was introduced when the two were being chased by lions and in order to save themselves, they used the stuff they had created to depetrify him, since his fighting ability was legendary.  The trouble arises when they discover that Tsukasa, the guy they released from the statue form, has been destroying the statues of old people (killing them); all because of a silly grudge. He believes that old people, fat people et.c (anyone that matches the stereotype of what he thinks) will just create laws and try to make things like land ownership and rent exist if they're released; so he just kills them. He thinks that only young, strong people should be released. After the beginning chapter, the story becomes about Senkuu going on a journey and finding recruits, to create a Kingom Of Science, as the only defence against Tsukasa; as well as to create an age of modern tools once again. The characters are all pretty funny, but also all skilled at what they do.  Art- The art style is incredible, and the level of detail put into facial features and other small things that add to realism enhance an already incredible plot and story. I love the way the characters are drawn, because they all have visible scars that look like cracks in stone. Essentially a mark upon their skin after their rebirth from their statue form.This teaches us a bit about the characters before we know them, and it also makes each of them look really unique. It makes the good guys look cool, and the bad guys come across as more angry, aggresive e.t.c. These scars enhance a characters traits I suppose. A lot of the time, when a character says a more poetic phrase or metaphor, the artist will actually draw an image to accompany it, which is really awesome. Like when they talk about a beautiful lake producing a gas in the air that will kill people before they even smell it, the character talks about a goddess reaching out to them, luring them in, and then melting/evaporating to reveal their true form, a wing-ed skeleton, an angel of death; and above the lake in each panel, we actually see the image of the goddess, and the transition to a skeleton take place, as they say the metaphor. One person's take on the series- "The entire world just turned into stone, 3700 fucking years passed, literally every fucking person is nothing but stone and humanity vanished from the face of earth. But yet, our main character's only fucking thought, his only FUCKING problem is this love confession that he couldn't manage to finish 3700 years ago. Oh yeah, the shounen logic strikes again." There truly is something for everyone in this manga, and you the individual will find it does more than enough to grab your interest and suck you in.

I read the manga only after watching a couple of episodes but it was damn worth it. But the reason I gave this a 7 was b/c for reasons I don't really understand; I keep binging chapters and then suddenly it gets boring, then back to binging and so on. I think this is mainly due to the repetition of: 1. need something 2. find ingredients or whatever 3. build 4. be amazed at mc's knowledge (which I most certainly was). The last time I read this was a few months so I think I'll just start reading this again. Oh! Another thing, the first part of the manga had GREAT conflict that died out but i hope they bring that back!

If only my education journey so far had been as exhilarating and awesome as I feel when reading Dr. Stone a learning something new! And the funny and odd expressions pulled off in the illustrations make the characters more upbeat and also at the same time adds up to the interset in reading all the scientific explanations. All in all, I liked it. Don't want to judge and be sceptical so much. (●´∀｀●) 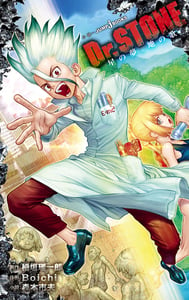 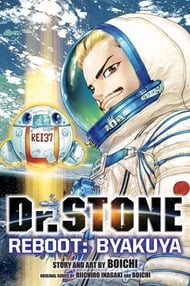 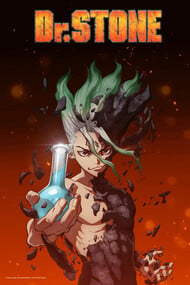 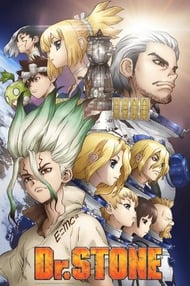 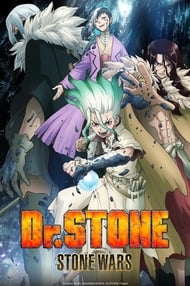