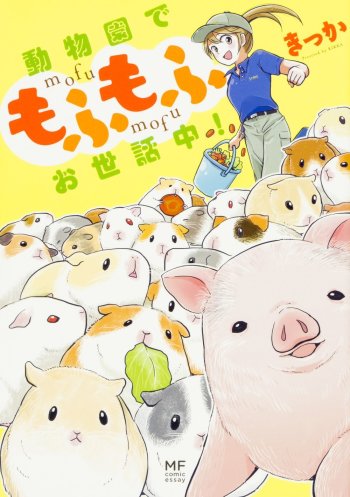 Ihatov no Futari no Sensei

Aoi Hana is a normal female high-school student, though she is extremely clumsy and thus tagged as good-for-nothing. But Hana wants to change herself and decides that finding a part time job would be taking the first step in that direction. Being an animal lover, Hana's job of dreams is encountering animals day-to-day and taking care of them - the zoo sounds like the perfect place for that. So when she happens to see a job offer from a local animal park it's settled she'll attend a job interview.When Hana arrives at the zoo everything seems just fine. The "Oumagadoki Zoo" might be going south but altogether it's your regular animal park. Just a very normal zoo, one might think. But that is only until Hana gets to meet the zoo director...

Eiji is a guy who loves animals so much he will spend his entire paycheck to celebrate their birthdays. Today, he is as broke as always! He is also constantly frustrated, muttering he wants to go at it too while watching two lions copulate. But then, he wakes up in bed with his straight-laced co-worker Mitsuru, doing it with another guy for the first time...!?