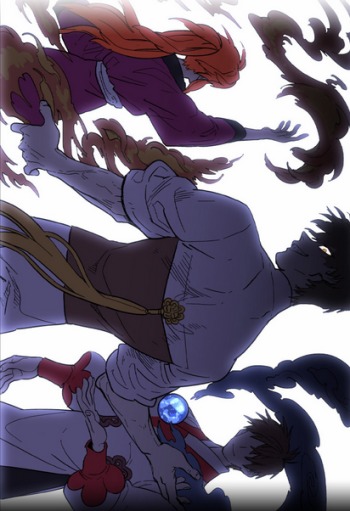 Märchen: The Embodiment of Tales

Märchen is a young man who was saved from the brink of death by a martial arts master by infusing her Ki into him. However, things take a turn when Märchen has no interest in fighting and aims to live a peaceful life. His "Master" then decides to make use of his ability to become stronger simply by reading tales and absorbing the techniques used in them. She introduces a huge library, filled with all kinds of books that record different forms of martial arts and techniques, to him. Märchen picks up a book and begins to read...

Dawn of the Frozen Wastelands

In a world of frozen wastelands, a group of heroes are destined to fight a war that transcends time and space.

Heart of a Dragon

It's been 70 years since the war between the dragons and humans ended. One day, a wounded dragon appeared in front of the human girl Koon... This is a tale of travel with dragons!

The Chat of Joseon Dynasty

A girl who doesn't know how use swords or magic but is the best at making potions.

Eun Ga-bi went to an alternative school in remote areas of Gangwon-do, as if running away after a friend's unfair death.There, she accepts a secret training method... Eun Ga-bi's full-fledged revenge begins!

"Had he been a hero in his past life or something...? That's right. I once rescued this nation from destruction." When Ja-in is kidnapped due to his family's massive debt, Unjo happens to walk by and save him from his kidnappers. From that day onwards, Ja-in's life is never the same...

The second season of How to Be God.

Call Me by My Name

When I entered the same university as my crush, to be with him, I met a sunbae who has the same name as that of my dog?!

The fun and mysterious daily life of a young couple in a forest and strange children who come to them one day.