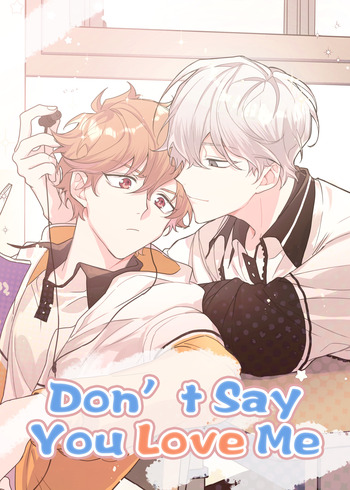 If you're looking for manga similar to Don’t Say You Love Me (Xiyuer), you might like these titles.

There Must Be Happy Endings

The day Yeonu’s contract marriage came to an end was also the day that she witnessed her soon-to-be ex-husband, Seonjae, die right in front of her eyes. But when a twist of fate has her travel 100 days back in time before the tragic accident, she decides to do everything she can to stop the accident from happening. With a second chance to make things right, Yeonu is determined to make sure that, this time around, they get their happy ending.

Very different stories but similar premise where MC gets confessed to/rejects a relationship with love interest before running away (literally and figuratively) which somehow leads to love interest's death. MC then time travels to the past and decides to save love interest's life all while falling in love with them.

After attending his high school schoolmate, Qin Xiao Shang's funeral, Xu Zhou is back to the time when he was in high school due to an accident. This time, his family is no longer fallen apart, and his friends are still by his side. As for Qin Xiao Shang, who will meet his fate in a few years, he is still that teen who secretly draws Xu Zhou in a corner... Everything is repeating once again, Xu Zhou felt that regardless of his high school grades or his future, he could still be rescued.

In his previous life, Xia Lin dedicated his whole life to Song Yan, yet he still can’t escape the fate of being Song Yan’s second option. After being reborn, Xia Lin has decided to cut off their twisted relationship and stay away from Song Yan…

I Will Never Be Into You Again

Xiao Qing arrives at home on a snowy day to find his boyfriend on top of another man in their bed. He rushes out into a defective elevator, which crashes with him from the 16th floor. He reincarnates in the day before meeting Qiao Yu and swears to not fall for him again.

The Imperial Master Above

Wu Xunmei and Xuan Jihua were the leaders of two enemy clans. They were brought together by fate and became lovers. However, they were both bound by the hatred of their clans and Wu Xunmei was forced to kill Xuan Jihua. Unexpectedly, Xuan Jihua was reborn. In this lifetime, can the two’s love bloom?

After attaining the title of fencing champion at the Olympics, Chris died in a car accident. At the funeral, Lin Yifei found out about the feelings Chris had never revealed before. As Lin Yifei realizes the regrets Chris had before he died, he unexpectedly returned back to his childhood?! Since he had the chance to relive his life, Lin Yifei chose to accompany Chris on his journey to attaining that prestigious throne once again!

My Godfather Calls Me Little Devil

“You’re mine. I’ll never let you go”. When I opened my eyes, I heard these familiar words. In my past life, I escaped. But now I clung to my things in the eyes of the outsiders. Mr. Fu represents a wealthy, powerful, and profound figure. In the Madame’s eyes, she’s cold-blooded like a Tibetan mastiff, aloof and smoothly easy to manipulate.

I tried so hard to graduate from college. Now you are telling me that I have to relive my high school life! And do everything all over?! Heavy homework, a lover that doesn't love me, troublesome puberty... Hey, leave that boy alone, I'm his real wife!!!

Mu Zhi Ming dated a scumbag, and was cruelly killed when on exile. After being reborn, he swore to never let history repeat itself. But as he was devising plans, he discovered that the cold general Gu He Yan is actually warm-hearted and sincere. Mu Zhi Ming decided to fall into the enemy’s hands and get married. But on the wedding night, Gu He Yan said to him: I know that I’m just a substitute for him. Mu Zhi Ming never said anything and just pushed him onto the bed, Gu He Yan: What are you doing? Mu Zhi Ming: We’re! Sleeping! Together!

The Prince and His Mischievous One

Lenka Normanster was betrayed by his childhood playmate Jane Grey soon after he took the throne and became the shortest-lived king of the empire. Fortunately, God cares for every living being, he was sent to the year when he was six years old. Given a second chance, Lenka was determined to stay away from that terrible guy this time to save his own life! ...What he didn't expect was that the relationship between them would become even closer?!