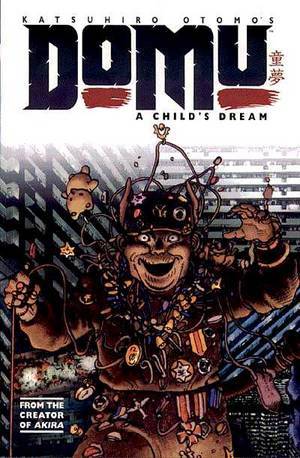 Both manga are by the same author and thus share similar art styles.  Additionally, both have strong elements of psychic powers and focus on young characters with great power and responsibility.

Both manga are - basically - about psychic powers and how they affect the world, the people around the users and the users themselves. Lots of destruction and action and, since their done by the same person, a cinematic style that permeates the work. It should perhaps be mentioned that the art style is very similar as well.

Not only are they both by the same author, with a very similar art style, they are also both about psychic powers and have a similar theme in that regard. If you like one, then the other is a must read!

They both have the same feel to them overall and are both manga which raised the bar dramatically. If you happened to like one absolutely check out the other!

In 1990 Yashiro Tenshuu murdered his lover and four others, sending him straight to death row. Now, the day of his execution has finally arrived, but at the last second he's given a choice: die, or go to work for a mysterious group of people. Choosing life, Yashiro is taken to a room and left in the company of another death row inmate, where they go from day to day with sake and other niceties, with no idea of why they are there. That is, until from behind a glass window, they see a beautiful girl awaken...

We can classify both as horror manga. The important element that brings them together is the psychic powers that some of the characters have and are able to use to torture, kill, destroy.

There was a fire. Kousei lost his mother, his father and his precious little sister, Sanae. One month later he woke up to find himself in a hospital and was moved to pediatrics where he could share a room with other boys his age. Professor Kimishiro is loved and respected by his students, but disliked by faculty and administration. He's pushed from his classroom by university politics and takes a team to the jungles of the Amazon in search of new medicines and perhaps a chance to gain back his reputation amongst those with influence back home. Instead of cures, his team stumbles upon a lost temple in the jungle, a place the village guides claim to be 'The House of the God of the Black Death'. What are the temple's secrets, and can any man, let alone a mere boy, survive the plague of an angry God?

Understanding that the quality of Otomo's work is higher compared to El El, I still get similar vibes from both manga. Two thrilling experiences, Domu being more mysterious than El El, which opts for a full zombie-esque experience. Art styles are not too far from each others, you might see some similarities here and there. As I already said here, El El got axed, don't expect an ending (I warned you!). Still worth giving it a try imo. Enjoy both reads.

Following a tragic childhood accident, Mitsuki Etou gained the power to read the thoughts of others using only the touch of her right hand. For most of her life, this gift has been a curse, granting her unwelcome access to the dark truths behind people's smiles. But when a chance meeting with a troubled co-worker throws Mitsuki into the middle of a murder plot, she can't just let tragedy unfold on its own. Can Mitsuki intervene without revealing her secret?

Daiba Kakeru has always felt like he entered a new world whenever he ran. Tiring himself out by running would cause something like a runner’s high and his five senses would go into overload, causing them to be hyper sensitive. He would be able to notice tiny details, hear ridiculously faint or far sounds and his body’s reaction time would be incredibly quick. Kakeru has had a crush on his classmate Natsume for months now and he's finally able to ask her out, only to find out that she ran away from home that same night. But Kakeru picks up on the subtle clues left behind and realizes Natsume was kidnapped. With the help of his resourceful science teacher Nezu Michiko, Kakeru uses his love as a motivation and hyper senses to track down Natsume.

A string of high school students have all been mysteriously murdered by being burned to death upon where water was evidently present. Junior High student Shirogane, a PSI (Paranormal Special Investigator) officer, takes action to solve this bizarre phenomenon. Upon questioning possible suspect Kirisaki Kirio, she discovers that he has the ability of electrocution! What other things will Shirogane unravel while dealing with this case of murders?