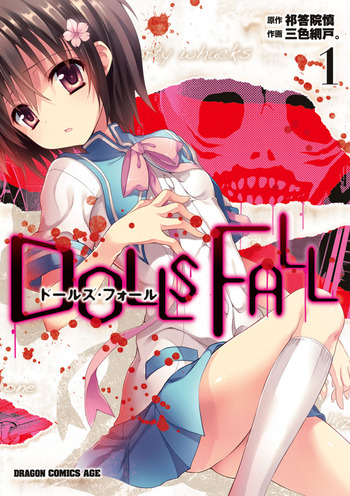 So no, the low rating I give this manga is not because it's got too much gore or whatever, because I fully expected that content. It's also not because the violence is aimed towards 13-year old girls (I was warned about this).

No, the low rating is because this manga is a complete mess. Killing girls in gruesome ways is fine and all, but if I don't know one bit about them I really won't care, especially if there are like 20 girls named (out of a total of almost 40). Another thing that adds to the "I don't care" feeling, is the numbing effect of the constant gore. Seeing a girl get blown up or cut to pieces for the umpteenth time makes even the shock effect go away.

And yes, there actually is some shock effect in the first chapters - or at least there was for me, because the violence was a couple of degrees higher than what I expected in a shounen manga. And those first chapters are also quite good at establishing the premise and creating a horror atmosphere.

But then there comes the middle part, with all the dumb plot-twists, nonsensical crap, villains with poor motivations and unclear goals, and gratuitous gore and sexual scenes - especially the unnecessary focus on girls pissing their pants, which is just as annoying here as it was in Elfen Lied.

They also added some superpowers for some reason, and not only did those come out of left field, they're also used poorly and not explained properly.

The "ending" also leaves a lot to be desired: we're left with a line "END OF PART 1" and a lot of plot threads are left hanging because there's supposed to be a sequel, but so far there is no manga sequel yet - I saw someone say that there might be a game sequel, but can't find any info on that.

The artwork is the best part of this manga - which is honestly quite easy - but it's still unimpressive. Especially the drawings of characters often leaves something to be desired: derpy faces, odd designs and bad proportions are seen relatively often.

On the other hand the backgrounds are done quite well, as is the gore.

This manga is a disappointing mess which tries to make readers sympathize with the victims of gore solely by choosing young girls as the victims. The "shocking" moments are overused to a point where you become numb to them, and most of the characters are absolutely boring. The "ending" leaves a lot of plot threads hanging, but at this point I'm quite sure that even a sequel can't fix the problems in this series. The art has it's good moments but also a lot of bad ones.

My recommendation: avoid, unless you really want to see loli-guts and undue suffering.