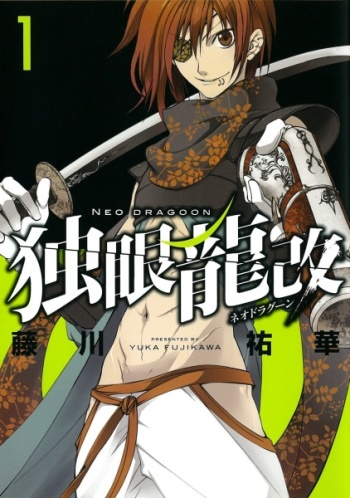 Benzo and Soji witnessed the death of Tatsugoro, leader of the Akame Gang. Tatsugoro's last words to them were "I'm leaving you two in charge", but it was Jinzaburo, the former leader's friend, who was chosen instead. Displeased with Tatsugoro's wife's decision, the two left the gang. They then set off on an aimless journey, vowing to accomplish something big.

Tells a fictional version of the story of historical Tang China diplomat Wang Xuance, centering on his diplomatic journey from Tang Dynasty China to the Empire of Harsha in India in the 7th century CE. When he comes upon a crumbling empire that is now hostile to him he escapes to Tibet and raises a confederation of Tang, Nepalese, and Tibetan soldiers to mount a raid on the Empire of Harsha.

Takeru had been taken as a slave by a gang of bandits after his friends were taken hostage when he met Habaki Sara, a small teenage girl with a giant sword. She single handedly takes care of the bandits with the use of her sword, the Tsukukagenohabaki, one of the seven legendary items. Sara is on a journey to find the rest of her friends with the remaining six legendary items. With the help of Takeru and her immensely heavy sword that only her small body can use, Sara continues on her adventure and takes names along the way.

The introduction of western culture into Japan brought extreme changes to their society. From shifts in political power to the people quickly accepting Christianity, the country saw drastic transformations. However, there were just as much people accepting the change as there were people opposed to it. The pirate Iori has been rebelling against the westerners and those allied to them. During one of the raids, Iori finds two foreign prisoners and saves them. They are secretive about their identity but Iori soon becomes invested in their mission.

This story begins around the time of the Heiji Rebellion (1159-1160), with the conflict between the Genji (Minamoto clan), led by Yoshitomo, and the Heike (Taira clan), led by Kiyomori. Yoshitomo's third son, 13-year-old Yoritomo, goes into battle against the Taira clan alongside his father and two older brothers. The events of this disastrous battle will change the course of Yoritomo's life, and eventually lead to his becoming a prominent figure in the history of the period.

Ichi is a lone goze (blind woman singer) who has become separated from her traveling entertainment troupe. Wondering how she will find her place in life, she carries only a shamisen (a traditional Japanese stringed instrument) and a walking stick with a hidden blade inside. When necessary, she uses her exceptional sword skills to fight off yakuza and other villains.

The end of the Edo period, the Bakumatsu, was an era of uncertainty and chaos, a time when the line between right and wrong was indistinguishable. During this era, Hijikata Toushizou, determined to live by his own rules, led his reformed Shinsengumi--formerly a ragtag group of mercenaries that became the elite Samurai fighting force of the shogunate--to glory. This is the story of his life.

Khan: Kusa to Tetsu to Hitsuji