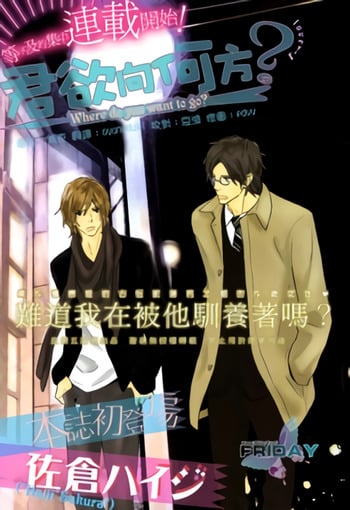 Bathed in fame, authority, assets... the noble family of Kyoto Haginokouji. Seiya-sama, the next head of the family, has just reached the age of 16 and still goes to high school. With anachronistic family customs, he can't stand having to keep his life a secret. His sole ally? The handsome level-headed Takakura Yoshiki. He plays the role of the Haginokouji family's young and skillful private secretary. But when it comes to his young master's childish antics, he melts on the spot...!

Kasumi's day just keeps getting worse and worse. First he's dumped by a classmate, and then a strange fortune-teller shakes his world as he reveals himself to be a genie in search of a master. And who could the lucky boy be...?

Kaoru's friend Masato seems to be chasing after Kaoru by going out with the girls who Kaoru is interested in, and then breaking up with them. One day, after getting dumped by a girl, Masato visited Kaoru's apartment and forcefully embraced Kaoru with the request of "comfort me". Although it's a relationship which started without any destruction...

When his interior designer mom takes off to New York for a year, Toranosuke, dorky name notwithstanding, gets sent to stay with his uncle. And it's just his luck that Ryouji is obnoxious, violent, and has the same sharp tongue as Tora's mom. Only it turns out that he's not really that bad, and maybe Tora is falling in love (with his uncle, of all people), and Ryouji has a heart of gold underneath the bellowing and violence. Except that Ryouji's pretty much the worst guy in the world to fall for: he enjoys sex more than eating, has a commitment problem, and has long since convinced himself that he's really, really straight.

Plain and shy college-goer Ishima's secret hobby is crossdressing. He gets hired part-time at a crossdressing bar, on the first day on the job he meets another crossdresser — Rina. Rina bears an uncanny resemblance to a popular guy in Ishima's middle school, upon whom the latter harboured unrequited feelings.....!?

A lover's possessiveness can make the beloved feel extra special. For high school student, Naoyuki Akiyoshi, that special brand of loving is given 24/7 by Ryouichi Sumi, who is not only his lover, but is also his primary doctor and legal guardian. As Naoyuki matures under Sumi sensei's care, he begins to push against the protective boundaries that Sumi sensei has created. Sometimes, change can lead to a deeper bond. And a new beginning.

Four-eyed Nobita is ignored by everyone at school or they highly suspect he's an anime dork. Little does he know, sexy Ritsu has been staring at him from afar. What happens when the glasses come off and what's next... the shirts?

Kai, who receives the "virtual-dream," a machine allowing one to dive into a virtual reality of multiple worlds and times, meets a man in the virtual world. This man introduces Kai to out-of-this-world sex within virtual reality. Unable to forget him, Kai dives again into the virtual world in search of him. Is this feeling lust? Or is it love?