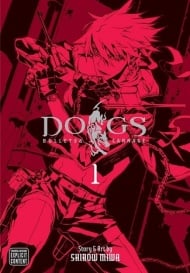 Badou's in trouble again. He's found some of the "Lost Children," rare genetic experiments left from the past--but so has the mafia. It's up to Heine to bail him out, but the Stray Dog has his own problems now that the enigmatic Giovanni is back on the scene. Meanwhile, Naoto comes to the Underground searching for the killer who wields the same strange black sword as hers. And so their paths begin to converge in the dark and dangerous heart of the city.

God damn it that's what I said when u finished reading this shit , like ffs the mange stalled for almost 7 years now , I remember when i start reading it I wa shopping to see something incredible but unfortunately I'm so frustrated the manga's chapters at the beginning were so short and especially in the last 10 chapters too , make me wondering is the author running out of ideas because it's sounds so that's why he took a rest for long time besides that so much stuff still without explanation and I assume the author just forgot to explain all of em why ! No fucking clue  , imagine I'm the last few pages of a random chapter gives u a preview what's gonna happen in next chapter , and after u going to next one , bang nothing lol just just forget I guess that he made something with all of that I foung myself enjoy some few arcs but eventually let's just wait for another several years to get the sequel

Ah, Dogs. A series that is currently holding a spot on my "obsessions" list. Of course, that's related more to the fandom, but you couldn't get into a fandom if you hated a series, right? So I'd like to explain why I am so in love with this series, so here we go!Story: The story mainly focuses on two boys, Haine and Badou, but that's not to say that it's entirely about those two. As the story progresses, there are many new characters introduced, and the story always incorperates them fairly well. All three main characters get full, fleshed out back stories, particularly if you read/watch "Dogs" or "Dogs: Stray Dogs Howling in the Dark" (which is labeled as "Bullets & Carnage" mistakenly on this site), respectively. Actually, that's really where the series loses a few points: there are a few points where you would be left wondering where small things came from if you hadn't read/watched the prequel. Most of the time they are relatively insignificant details, but sometimes they are rather key points, such as much information about Naoto's past. Disregarding that, the story is interesting, and fast paced, so you never have to wait too long for things to get going again. There are very few "breaks" in the story- the characters are almost never able to relax. Things are always going, and that can make it a little complicated sometimes, but for the vast majority of the time, it's not difficult to keep up at all. It's also hard to tell what time period this manga is supposed to be from- there are times where it feels like a old days New York manga, but Badou mentions in the third or so chapter that Haine was "probably up all night playing video games again", and their clothes don't really hint at being older styles. Art: The art is really nice. As typical of shounen manga, there is a lack of fancy textures and screentones- all you see is what you need to see. The characters have varied appearences, and a variety of expressions that the artist pulls off very well. There is actually no grey used at all, which is rather uncommon; only black and white is used, but I find that actually helps draw your eye to specific details rather than lots of things getting lost due to nothing in particular standing out. The reason this category lost points is because sometimes it's a little hard to see what's going on, particularly in fight scenes (which this manga has quite a few of, which is unsurprising given what the story's about and the fact that it's considered a Seinen manga). Needless to say, that gets a bit tedious. Overall though, the drawings are high quality and very dynamic, and the characters really have personalities. Characters: I've practially already covered this section in the other two, but anyway! As I stated before, there are really two main characters, though it's negotiable that Naoto could be conted as one as well. Each of these characters have full backstories, and the information isn't kept from us- we learn about Haine's past directly from him, rather than some third person, which is unusual. Each character has real motivations, and act on them in interesting ways. Another thing I really admire is the dynamic between all of them- Haine and Badou are partners, but they only get along about half the time. Haine has gynophobia- fear of women, that is- and reacts to Naoto maintaining that. Badou is rather cowardly, actually, despite the types of jobs that he and Haine do. In fact, he even complains about their jobs rather often. Haine and Naoto actually don't get along well at all, which is a nice change of pace from all those mangas where the main characters all get along just because they're "supposed to". Basically, once the characters have established personalities, they actually stick with them, though sometimes they can fall into stereotypical tough guy personalities. It's a balance of being unique, then getting cliched again, but it's not that bad. There are no sudden motivation changes, and everything feels well developed and thought out. The characters stand out- even the enemies and minor figures. Overall, I really like this series and think it's a nice break from typical gun-totting mangas that only focus on the action. It's a nice balance between action and plot, not too fast paced but not too slow, either. I would recommend this to anyone who doesn't mind a little violence, and a fair bit of swearing, and is looking for a somewhat familiar but still unique manga. 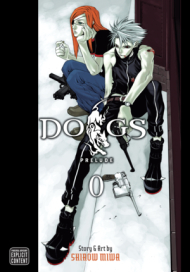 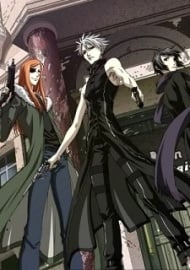