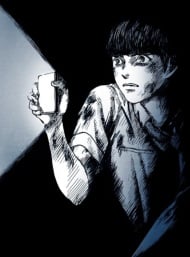 This webcomic is over now, so unsure as to why that isn't an option, but whoooo boy. This was one of the first pieces I read on the Webtoon app, and opened up a whole new realm of horror for me. It was truly one of the first horror comics I ever read - I'd had a solid few years reading NoSleep at that point, but this was a transition for me into new media and entertainment... like, a Junji Ito gateway drug.  I genuinely cannot recommend this enough. It had me gripped all the way through.

This Manhwa is simply spectacular, one of the few that managed to make me uneasy and suspense at the same time, certainly one of the best horror and post apocalyptic manhwa of recent times. Story: (no spoiler) the story is very interesting, there are a lot of mysteries and twists that will unfold as you go along, but its strongest point is the dark atmosphere and the concept of survival in which the protagonists are forced to face in order to continue forward. The story is mainly divided into 5 seasons, the first 3 seasons focuses on the 2 protagonists trying to survive and at the same time finding a safe place to live their life quietly,the season 3 finale will blow your mind at how it ends, the only thing that I have not totally appreciated are the time jumps (i.e. the alternation between past and present) that occur throughout the story to create more suspense (in particular in a precise point of the work) since it changes the scene without you realize it and it often leaves you confused about the events that follow. The 4 season instead have a total change of scene, we see the point of view of another character and how many of the survivors try to survive in this now devastated world, the 4 season is perhaps the weakest of all but it remains very interesting at the same time. Finally we have the 5 season in which we come to discover many backstories of many characters and we move towards the conclusion of the story that ends with an ending that is truly suitable for everything we have seen, it left me a little bitter in my mouth but I felt satisfied with how it ended and at the same time happy to have followed this incredible story, the only thing is that maybe some things could be explained and explored better. Characters: I will mainly talk about the protagonists to avoid spoilers, but I just say that many of the secondary characters perhaps had to get more insight to better understand their way of acting.Haneul Kang = protagonist who fits well in this story, at first he will find himself a bit confused but after will begin to assert itself, it is not that he has such an excellent characterization, but he is not bad as a characterHeyool Shin = my favorite character of this story, she too is unaware of many things that happened at the beginning but she is more aware of many things of the protagonist, her way of acting for some protra seems a bit annoying, but I found him perfectly consistent in the situation in which they found themselves in in order to survive, his writing as a character is very good.Nara = this is more of a secondary character, I found myself empathizing with her for what happened to him. Art: I found art to be simply fantastic for this type of story as it increases even more the sense of suspense you feel when reading this manhwa, although the designs in many plates are not always well done, especially some colors such as blood. which seemed fat with paint, in short, a pity that from this point of view I sin a lot, because it could have been much better, good but not very good. Horror: the best part I would say, I read this manhwa because it was post apocalyptic (very well done) but the horror component and the survival theme are definitely 2 of the strongest points of the work, if you are looking for one of these 3 themes i am sure you will not be disappointed. Conclusion: I consider this manhwa a simply fantastic work to read for the content it offers, not a masterpiece, but for sure a high level story, I really recommend everyone to give it a chance if you like me genre you will not be disappointed, I hope this manhwa gets more recognition because it really deserves a lot