Dine With a Vampire - Recommendations 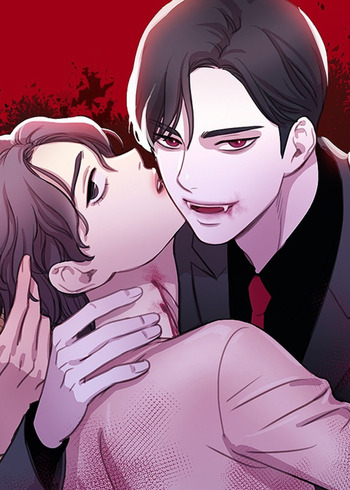 My friend of 15 years Hyungwoo has always been secretive about things. But one hazy night, he’s bitten my lips because... he was a vampire all along! "I'm a vampire and now... so are you!” Why do I suddenly feel… thirsty?

My friend of 15 years Hyungwoo has always been secretive about things. But one hazy night, he’s bitten my lips because... he was a vampire all along! "I'm a vampire and now... so are you!” Why do I suddenly feel… thirsty?

Available on: Tappy Toon & Mangago (among other sites)

As a child, Yui's busy, working parents didn't have time for him, which led to the boy becoming attached to the mysterious "Nii-chan" who always had snacks and games for Yui to play. The older, predatory man made an advance on Yui, and the boy ran. Now, years later, Yui is a teenager who still can't get over the incident. He decides to seek out his "Nii-chan" to sort out his feelings, and finds him... for better or worse

I'm Yours, Blood and Soul

"Don’t come inside me…!!" The pleasure of his come flowing into my aching ass… I can’t believe it feels so good to have sex with a demon…!

A serious student, “Shiraishi Makoto” is brutally abused by his parents and yet he longed for his parents’ love. However, he didn’t want anyone to know about his secret until one day, his classmate - Fudou, an a heir to a wealthy company - found out about it. To keep him quiet, Shiraishi is willing to do anything to satisfy Fudou, yet Fudou forcefully asked Shiraishi to have sex with him.

On a rainy night, after being assaulted, I wake up and find myself in prison. Then there appears a bright smile in front of me and a recommended meal. How will our strange relationship last? A story of a mysterious, deeply disturbed young man who has forced a zombie to live with him and tries to get him to eat vegetables.

Mimasaka-san is hiding a big secret that will lead to his perdition... when Kagaya finds out and makes use of it to catch him.

The Blood of Madam Giselle

A rebellious spirit trapped in her marriage to a violent husband, Giselle leads a miserable life playing the role of a meek wife and lady. But one night, wandering her new home, Giselle discovers what seems to be a young boy trapped inside a cage. An inheritance from her husband’s eccentric father, the boy is considered a monster, an immortal “flower that feeds upon blood”. Despite her fear, Giselle begins to visit the boy nightly. Will these illicit meetings shatter life as she knows it?