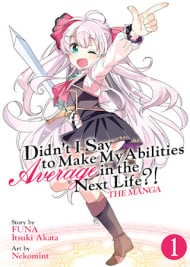 I split this review by the volumes, as the quality varied significantly between them, but if you don't want to read all that, the long and the short of it is:Don't read the manga until you've read at least the first light novel.Vol. 01 : Story 3 Art 8 Character 4 Enjoyment 3 Overall 5Although the art was good, quite frankly, this manga is a mess.Perhaps if you are new to the story it may seem okay, but the beginning of chapter two starts at the LNs chapter 20 something, and then, when we're not reinventing side characters, we spend pretty much the entire rest of the volume backtracking from there.What original content is covered skids over quite a few important character building stages and backstory with a "this happened, next" without ever actually giving it any meaning.As we're dumped into the story at arc 2 (having just glimpsed the primary back story and start of the first arc) we haven't really developed an attachment to the protagonist as we don't understand her situation or personality, which is shown in the first arc.When we're introduced to the primary characters, unlike in the book where they enter in sequence so we receive Adele's/Mile's brief first impression of them, they're all thrust in at once. Because a lot of things are cut short like this, there are times which Mile effectively tells us things, sometimes quite obviously, in her thoughts, because we don't get to see the events which would lead us to understand these facts anyway. Sometimes things are skipped all together, or completely altered in a way that I simply can't appreciate. Of course editing and alterations are natural when adapting anything, but unlike book to film, LN to manga doesn't have "time restraints" as such, being a serialized medium.I was rather looking forward to reading the manga after the novels, as there is quite a bit of slap stick comedy which doesn't read as well as it would in a visual format, but seeing these moments play out isn't worth the nonsensical story telling.If I didn't already know the story the whole 1st volume would have gone straight over my head. The plot cuts back and forth, characters are thrown in at an undigestable pace, and there's barely any room to introduce their personalities, never mind the idea of character development.Because of the way it immediately jumps 20 chapters ahead it almost completely invalidates the meaning of everything that was supposed to happen in between, because you already know the result, but also, you don't really care about the result either. This sin't helped by the loss of the protagonist's internal worries and reasoning, so that she lacks any profound personality beyond the cardboard cutout of "cute OP airhead". The whole thing reads practically as a recap, and then the 2nd volume starts with a recap of that. Only the 2nd volume's recap is in order and actually makes sense.If the first volume had stuck to adapting the first arc alone, following it chronologically at a normal pace and developing it's characters, leaving the second arc to two more volumes, rather than trying to fit the entire first novel into 2 volumes, it would have been much better, and Adele's first ever friends wouldn't have become less than throw away characters.Vol. 02 Story 6 Art 7 Character 7 Enjoyment 7 Overall 7After Vol. 01 my expectations were significantly lowered, and pleasantly overcome as a result. The pace slowed down a lot, and I enjoyed the expansion in the character time, of Mavis particularly, but in general it's the first time we get to know the characters properly. Although we've already skipped over the first half of the second arc in a rather unfortunate manner, and all of the minor characters are erased entirely, most of the key points are all there and well presented, if a little briefly - what you'd ordinarily expect of a decent manga adaptation.Unfortunately we don't get to see much more into Mile's mind, but I guess one can only hope for so much improvement at a time.The artist is very good at drawing cute girls, but other things are slightly sub par - especially men and swords; generally I like the art, but the swords do suck. Some moments in the fight scenes are a bit weak, but the composition is quite good so it's okay I guess. The exception to this which comes to mind is characters' feet sticking beyond their panel and into someone's face, but in exchange we get cute lolis and magic circles, so I'm not really sure what to say.Overall I'd say it's worth reading, just as long as you already know the story, as there are some good moments, and hopefully it will continue to improve in the future.Note; there are randomly spoilers in the bonus chapter at the end, which peevs me. If you want to avoid that read up to chapter 90 first. 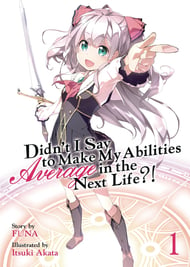 Didn’t I Say To Make My Abilities Average In The Next Life?! (Light Novel) 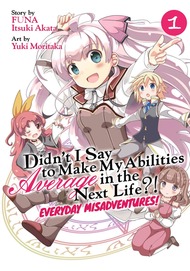 Didn't I Say to Make My Abilities Average in the Next Life?! Everyday Misadventures! 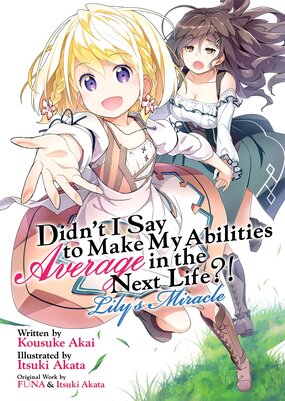 Didn’t I Say to Make My Abilities Average in the Next Life?! Lily's Miracle (Light Novel) 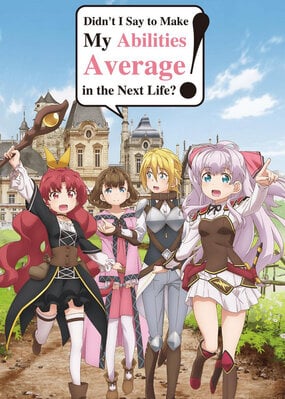