DICE: The Cube that Changes Everything 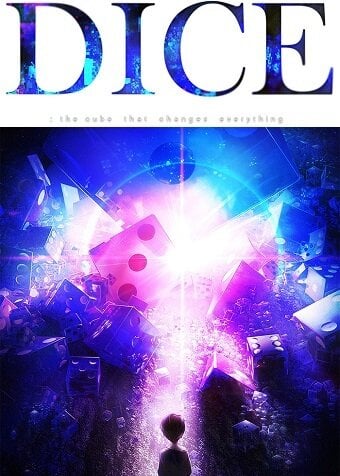 What if you can restart your life with a different setting just like a game? Dong Tae always get bullied by his classmates, but Tae Bin, sits right next to him, is handsome and popular at school; and now, Tae Bin suggests Dong Tae to play a little game.

Imagine you could change your life without any bigger effort. You just have to do what a man on your phone orders you and then you earn almost anything you wish. A young boy Dongtae has a horrible life. He is not handsome or clever, has no friends, is bullied at school and his mother is an alcoholic. The only light in his life is his schoolmate Eunju because she is always nice to him even though she is very beautiful and popular in school. Truth is he is in secret love with her. One day the new boy comes to Dongtae's class. His name is Taebin and he looks like some model, is clever and perfect in all sides. And what more - he starts dating with Eunju. The first Dongtae wonders why the life was so unfair to him. But then he finds the DICE. He starts playing strange game with mysterious mr. X where he has to complete easy tasks. Then he earns more dice and he can make his life better in all aspects. He becomes more clever, strong, fast, handsome, popular and everything seems good. But then the DICE spreads among the other shoolmates and the fight begins. Mr. X gives more and more weird tasks and people are more and more greedy and they are even able to kill someone only for the DICE. My review: I like Dongtae, he has changed so much but he is still the same in his heart, has a good personality. He is really strong (but not really clever) and wants to protect people even without the DICE. I don't really like Eunju, she is indecisive, naive, wants to protect everyone but does nothing for that. The story is great, it shows how people are selfish and change when their succes is within reach. It is well balanced between action and romance. I like the art but the characters are sometimes very similar which can be confusing. But it is problem in almost every manga. I hope Dongtae becomes some strong boss of the game and kicks everybody's ass.

I will admit this the story starts off extremely so slow it is very hard to get into at the beginning and finding a source is not incomplete nor broken is difficult in its own right. For chapter 1-56 use mangareader {https://www.mangareader.net/dice-the-cube-that-changes-everything} then use Deathtollscans {https://reader.deathtollscans.net/read/dice_the_cube_that_changes_everything/en/0/57/page/1} the best place to get them without being cut or modified. Now I did like the overall story and narrative but again it doesn't get high marks because it doesn't do anything specifically well or new. ~SPOILERS~ From now on I'll be calling the people wrong names I will link their correct information only one time let's see Dante(Dongtae) is a bred shuttle which basically makes him the bullies bitch boy he does their errands gets their clothes gets food for them with his own money. Basically the story starts out with a character person who rolls all wants and it's a picture of Dante. Then T-man(Taebin) comes out of nowhere looking good being strong very athletic and very smart so he's everything Dante's not Dante's jealous I forgot why but he decides to follow T-man the middle of nowhere T-man goes out there because of X, we find out who that is later, and the dice appears in front of Dante instead of T-man now we find out later in the series that the dice are actually supposed to appear in front of you or at least in a very close at hand location I'm thinking X decide to spread the dice on purpose more so than T-man doing it. Now I can go on and on about some other bullshit but lead us to say that Dante wants to impress dumb bitch(Eunjoo) because she's pretty and always nice to everybody. This is a bad situation to start off but it's jumping off point that this story takes. With his first die he uses it to change his looks eventually he changes his all sorts of other abilities including intelligence and he absolutely maxes out his agility that is literally Dante's signature thing super fast super accurate massive agility. Eventually his friend no way he's actually an acquaintance so not even a friend starts to be the new bread shuttle and is getting picked on Dante saves him and kick their ass and gives out a die to this do BB(Byeongcheol) bitch now this kid is a super nerd and somehow he knows shit ton of stuff about the dice that not even most of the other people know because he hacked into some sort of Mainframe of X . and somehow the final die and X are tied together to the world in some fashion which they don't explain and how BB actually hacks into this Mainframe is never explain and never explored ever again WTF. Anyway BB is given a quest to go to the school and set it on fire well to be honest he fails horribly and the only way he escapes the Patrols in the school is by hiding outside the girls bathroom on the third floor I believe outside window so he's hanging on to the gutter system which is rusted or something. Anyway Dante was actually given a quest to go to the school and open the window and Save BB but he doesn't he says I don't want to do a quest it's too late at night and I'm tired. Guess what BB is now dead . he fell from the gutter or better wording would be daughter gave way as he was hanging on and he fell to the ground face-first into the pavement doing this this is the first time we actually see this but we don't know about this is that when you die your dice it's literally explode from your body so there is a whole bunch of BB's dice everywhere . and this is the main point of how the dice spread in the school. No I'm not going to go into more detail than this because it's going to be way too long it's 227 chapters (as of 3/27/2018) and as of now the actual artist has said that this is the last "chapter" and seeing as this is chapter 4 and it started around 200 or so I'm going to assume that means we have about 23 more chapters left as I'm guessing each chapter is about 50 "episodes" long. Anyway T-man is scared of some dude named Moo-young we find out later Moo-young took over T man's brain and they're sharing the same body. Moo-young is obsessed with fighting X, Dante makes a bet with X that if he Gathers 4 a rankers together the x would have to show himself. which he does they fight a bunch Dante throws some sorta sword cutter into the final die hurting X and then he does the same move and cuts off one of X's arms. then T-man comes out of nowhere and fights X and we never see it nor do we know why his body is covered in scars. Now to be honest with you nobody was expecting Dante to be X but he did get in a fatal deadly blow X is not dead but he is severely injured. Dante has lost all his dice except his TimeCutter / time stop is teleportation and his special super crazy good die. As of right now she got captured by Mio his girlfriend and he is the price for tournament of fighting between all other dicers. the end. I would recommend to reads at most you will pick up on things you don't learn until later on and see subtle hints and clues that lead to other things well as well. I can't be more specific because there's too many . TL: DR - read twice, enjoyment Factor goes up the longer you read, huzzah.

Insidious Mist Reviews Genre: Action, Drama, Fantasy, Psychological, Romance, School Life,Shounen, Slice Of Life, Supernatural, Webtoons The Internet Summary: Dongtae is rock bottom in everything.Looks, grades, life, everything.But all that might change.If you could change your life by playing a game, would you?Original Webtoon / English Version by Naver My Summary: As the internet summary implies, a character named Dongtae is rock bottom. He is so rock bottom, he makes your whole life better. He lost in looks, he is clearly lacking in academic achivements, physicality, socially awkward (continuously bullied) and..well basically everything. Well..isn't this depressing... But one day a new transfer student came in and eventually led him to this amazing system commonly refered to as 'Dice'. Where it can significantly impact everything in your life.. So how will his life play off. Story: As implied before Dongtae is your average, oh right sorry...below average guy. Kinda like me in the class room (sob). Back to Dongtae he soon yadahaha recieves his die, but as soon as he did he didn't know that a contract had been sealed when ever you roll. His phone gets implanted an app of a person who will be willing to give more dice, provided if he accomplishes in his quests. These quests are all created through the desire and will of the dicer. (dicer is the term of a person who has already rolled a dice as he is already participated in the game). As the story progresses more plots reveal themselves including the so called end goal, of beating the person who created the die. Art: Brilliant... Character: Dongtae is one of those characters you don't see often, where he is calm but never make rash decisions, but sometimes that makes him pay the price (you will understand me if you read the manga XP) Most of the characters in this manga without spoiling too much are all actually well made. You have his dream girl, best friend (sort off), teammates, associates and others. Overall: Please give this manga a shot..whit hang on. I gotta kneel down.(kneels down). PLLEAASSE read this manga. this is a really good manga, it's as good as a Wonka BAr... 9.7/10 P.S. .3 diappeared because one guy just annoyed me so muchhhh (but don't let that bother you :3) Keep being mysterious... G.