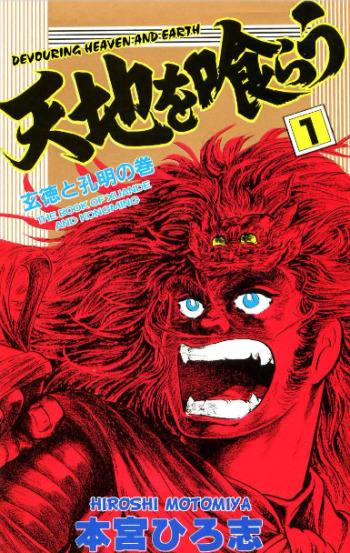 China: 184 A.D., a time of great turmoil. Zhang Fei stumbles upon a slaughtered village and has a chance encounter that will change his life forever. Guan Yu, second in command of a volunteer army, recruits the brash but inexperienced young Zhang. The army's first duty is to repel an invasion of a walled city, and although Zhang misses most of that action, he has his own. As he saves the life of a little girl, an arrow to the neck throws him off a cliff. He is rescued my two wizards who give him the power to resist all wounds. Zhang is about to become the most powerful soldier in the army, but at a price that could cost him his soul!

This manga creates a entirely different image of Zhou Yu who is portrayed more as a bad guy in "Romance of The Three Kingdoms." But, Zhou Yu is dashing, handsome, and young when he meets the heroine...

Don't Tell Me This Is the True History of the Three Kingdoms!

I suddenly got hold of a feather fan, and came to an era of the Three Kingdoms which I completely do not know about. What? Gender equality? Girls can join the army? You, you and you, why are you all girls!? An interesting story unfolds in a familiar and yet, also unfamiliar time. But perhaps this is the Three Kingdoms, the true Three Kingdoms!