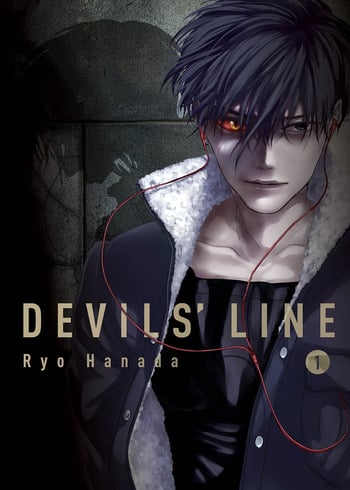 I don't often post reviews, but I've noticed my manga choices are usually pretty dead-on with what is worthy of picking up & reading. I initially bought the first Devil's Line mainly because of the art. I love the artist's style, and the main character is my definition of cool looking, especially when he "transforms" into his Devil-form (aka Vampire form). Their eyes turn black and red with veins protruding around the eyes, huge bottom and top fangs grow, their teeth sharpen, long sharp nails grow, and their strength and bloodlust becomes out of control.

Aside from all that, the storyline itself is mature with themes of society, racism, politics, corruption, and friendship/love. It's basically everything I've ever been looking for. I even like the female lead, and female leads in romances often annoy me for being completely and utterly foolish; endangering themselves, being oblivious, walking straight into traps, etc. I went out and bought the rest of the 5 books as soon as I finished the first, and though I admit it lost some steam in the middle (less nudity and sexual tension), it was STILL amazing throughout, and I am so glad it exists. My boyfriend even loves this series--it is certainly not just for girls because of the romantic aspect, nor is it just for guys because of the violence/action.

I hope more things like this show up. IF you know of anything similar, or any other dark romances, PLEASE tell me!
For now, I greatly look forward to the next volume!

It's weird, it's creepy, it's dark, and it's pretty dang good. It is not what you imagine when you think "vampire romance." The most obvious difference is that the romantic subplot (vampire cop guy and non-vampire girl) and the nonromantic subplot (shadowy organization trying to genocide vampires, who make up about .01% of the population) get roughly equal attention. The story may even be biased slightly towards the non-romantic plot. And the non-romantic plot is strong enough to stand on its own as a compelling story.

But what really sets this manga apart from "vampire romances" is how thoroughly unromantic the Devils' Line version of vampirism is. It's not uncommon for a romance to bill itself as a "Beauty and the Beast" story. But it's rare for the reader to really feel that the beast is actually a danger to the beauty. If the beast is a vampire, his longing for the blood of the beauty is used as a metaphor for his passionate love for her.

Not so here. Vampiric bloodlust is brutal, disgusting, and even sexual (in a rapey way, not a romantic way). It is a genuine obstacle, and at times a seemingly insurmountable one, to the romance between the main couple. And this horrific depiction of vampirism is juxtaposed with a genuine tenderness between the two protagonists. That alone is interesting enough to make this series worth a read.

Whilte reading this manga, I wasn't sure at first how I would like it, even though my tastes are all over the spectrum. In the beginning, the translations were difficult to follow while LOLScans was the main group working on it, however after chapter 28 someone else takes over, though I don't know who it is. They're scans were much better quality, and it was then easier to understand what was going on.

I sincerely liked the different concept of devils/vampires in this manga, I liked how much the author was trying persaude the reader that no two people are entirely different, it's like a lesson in not judging a book by it's cover, or in the case what you look like.

I rated the story 10/10, because it is beautifully written and sucks the reader in easily, even after just a few chapters. I couldn't stop reading for a few days, when I finally reached the latest chapter that was out, I was disappointed that there was no more available for public access (though ComiXology has up to 61 chapters available with purchase). Usually I dream about the content and come up with my own versions if I am left unsatisfied, that did not happen with this manga, which made me very happy.

I rated 10/10 for the art because this style is unique, Ryo Hanada's style expressed the characters emotions expertly, which causes you to fall in love with them or hate them, depending on your views.

The characters were rated 10/10 because, again, Ryo Hanada's development of them was simply awesome, the way they progressed, struggled, were careless, were caring, were brave, it was all very human of them and very in depth. I found myself liking several characters by the time I reached chapter 52, and not disliking quite as many as before. Though, I still firmly dislike a few, just because I find their personalities annoyingly written, as they remind me of real life people that I personally know.

I am glad I found this little gem, I hope to one day purchase the translated books one day, when I can.

I feel the genre is incorrect though. It feels more like a pyschological drama to me, than dark fantasy.