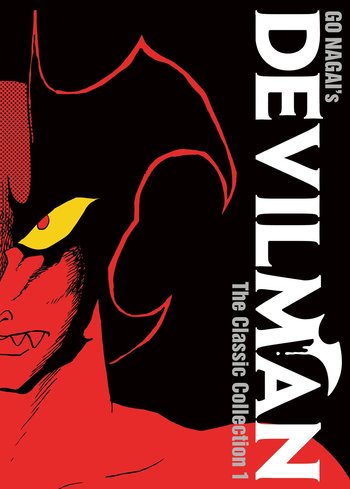 I think a big part of why I got into the Devilman manga was because of the fact that I saw Devilman Crybaby, one of the first big hit anime to come out 2018. Now out of curiousity I have read the original story by Go Nagai and I still think it holds up pretty well. Here are some of the finer points of why I think Devilman may be Go Nagai's best work.

Story- The manga is basically following the story of Crybaby beat for beat during the introduction when Akira and Miki are jumped by some punks on their way to school. Ryo fires some shots from his gun to scare them off, then spirits away Akira for a plan he has in mind. After explaining to Akira that demons are trying to take over the human race and proof of how they've always existed, he explains his plan of fighting back against the demons. He plans to have Akira fuse with a demon because he has the qualities to control its powers, and explains how they plan to do it. I think for the most part the manga does a good job explaining its themes because it takes the time to explain them more effiently compared to the anime, not to say that the anime does a bad job of it. Within the first volume, we finally get to see Akira turn into Devilman and that is when Akira's war against the demons truly begins. The story begins to take a different turn when humans begin to discover that demons really exist and that in turn begins to affect how society begins to fall apart at the seams, leading to all of hell breaking loose. Its one hell of a crazy ride from start to finish!

Art- Now the art looks pretty decent for the most part. The author really adds to the atmosphere with the body horror transformations we see with some of the demons and the characters. Easily one of the goriest shonen series to come out in the 1970s. And the author isn't afraid of showing some of the explicit violence that happens with some of the really unlucky characters. Tragedy is never far from the characters of Devilman. I also like to add that the nudity feels like a theme to the lust that adds up to the nature of humans and demons for the series, which adds to the themes of Devilman pretty well.

Characters- For the most part, I think the characters are for the most part pretty decent. Akira is a pretty straightforward protagonist to put it simply. A pretty normal guy who has a pretty crazy friend being Ryo who happens to get friend involved in something big, but was willing to go through it because he has a good heart that wants to put others first. Akira just has that nice boost of confidence when he becomes Devilman, although at the same time he isn't as portrayed nearly as empathetically as the Akira from Devilman Crybaby. Nevertheless he's still a good character who still cares a lot about the people who are getting slaughtered by demons. He not one to sit idlely by when stuff is happening. He will take matters into his hands, consequences be damned, all while being driven by Ryo, the one behind his journey the entire time. Akira is an inspiring character. Ryo has always been the character who has unconsciously been manipulating everything from the background, not just with Akira but with the later events in the series. He is a cold detached individual who also happens to be pretty calculating. He is the driving force behind Akira throughout the series. The build up with the plottwist with Ryo was pretty well done, most figuring it out from the foreshadowing. There was even a fair share of foreshadowing for Ryo in the Devilman Crybaby, if you're looking hard enough. He is a fine example of what happens to a character when they push away the concept of love completely from themselves. Its not until the end that Ryo finally realizes how much he loved Akira, but that was pretty obvious with his actions during the series. Miki is easily the ideal girlfriend for Akira. Just from the first chapter you can already tell how well she happens to know Akira, and she isn't afraid to stand up to bullies. She is actually quite the honest girl who also happens to hold a special place in Akira's heart. She helps bring a sense of normalacy to the story, along with the Makimura family, although they also do this with the rappers from Devilman Crybaby. She doesn't feel nearly as outgoing as the Miki from DMCB sadly. What happens to Miki's family quite differs from the anime. It all builds up to the tragedy that eventually happens in the story. I did feel some disappointment with some of the choices with the villains. There's no build up with Silen compared to the anime, and although Zenon was made out to be the big demon general of the demons in Devilman, I hardly ever saw him do anything in the manga, just look big and imposing. Even the other villains felt better than him. But other than that, I generally feel pretty good about the other characters.

Overall- Devilman is definitely one of the best shonen of the 70s, not only for being a source of inspiration for other big hits like Berserk and Neon Genesis Evangelion, but for being progressive for its themes. Persecution, prejudice, human nature, society falling apart, war, and also SPOILER the apocalpse. Devilman deals with some pretty heavy stuff, while at the same time being a shonen series. It created the concept of the evil main character genre which is actually quite interesting. The manga is good but I like to think that DMCB is also a good reboot of the series for the newer generation, having a good modern revitalization compared to its 70s counterpart. The manga is definitely worth checking out if there are people who want more Devilman if they have finished Devilman Crybaby. The One Summer Day special chapter is a must for those who love to ship Akira and Miki as a couple. That chapter so made my day the moment I read it!