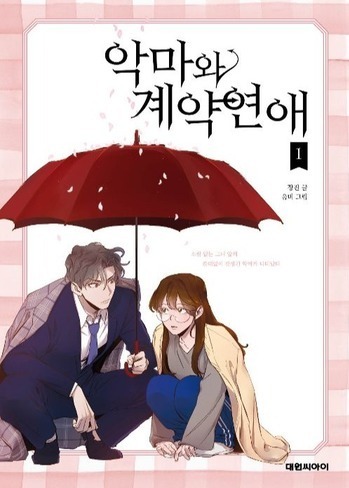 When a down-on-her-luck student runs out of money – and hope – it’s time for the devil to make his entrance and give her an offer she can’t refuse. But this devil has problems of his own. He’s a cog in Satan’s corporate ladder, who’s quickly losing credibility because that same desperate girl isn’t ready to part with her soul willingly. Now, she’s working at his coffee shop while he tries to convince her that she can have it all. And the cost? Merely her mortal soul…

<READ IT ON "WEBTOON" FOR FREE AND TO SUPPORT THE AUTHOR>  Read at https://www.webtoons.com/en/supernatural/devil-no-4/list?title_no=1695&page=1 I really like the concept of this webtoon. The angel-devil-human-god fantasy concept has been used many times, but this webtoon does it really well, so it does not feel cliche. Excellent story development and gets really interesting as the story progresses. The art is absolutely beautiful, and all of the characters look amazing, especially Mika. I really like the artstyle, so it's a 10/10 for me. As for the story, it's well-paced but could be considered slow for some. The plot gives enough development to each character, and it makes the readers curious, especially the flashbacks. The beginning chapters where Devil No. 4 (male lead) is trying to get Hanna (female lead) to sign the contract is quite slow. They signed the contract at chapter 15, but they actually finalize the contract and what Hanna wants at around Chapter 23. After that the story picks up and the first arc peaks at around chapter 52. After that, more flashbacks appear and we understand more about the characters. Actually, I like the second arc a lot more than the first arc. Devil No. 4 and Hanna also develop their relationship well throughout the story, and do talk to each other about their feelings in the second arc. Basically, the story gets very good after they finalize the contract. Also, I liked the humour sprinkled throughout the webtoon. As for the characters, they're alright the first 30 chapters, and get better later on. The female lead seems to be indifferent towards life, but there are underlying reasons for her perspective, which are expained early on. At first I saw her as a bland person, but she gets good development to the point where she's a likeable character. The male lead has an interesting personality. The main characters get really interesting as the story goes on, but for the first few chapters everything was kind of boring. I don't like the slight love triangle between Hanna and Joon and Devil No. 4, but Hanna makes it clear in the second arc that she only sees Joon as a friend, so the triangle didn't bother me too much. Other characters play a pivotal role in the story, and I love them all very much. Mika, Devil No. 2, God, and Peace are excellent sub-main characters. All characters were introduced smoothly and make the story more interesting.  Though the first 25 chapters didn't capture my interest much (though they were essential to the development of the plot), it gets really good later on, especially around the latest chapters. I recommend you give this one a try.

Read up until chapter 49 and thought it was rather bland overall. Wouldve expected more by not focusing so much on too many other characters but instead, both the girl & the devil being together more....

I dropped on this manga a few years ago, and decided to come back to it (just because I was really bored). It was kinda cliche and somewhat annoying at a few parts, but after a few chapters, I really enjoyed it. It does start off slow, and makes you want to drop it but later on it gets better.