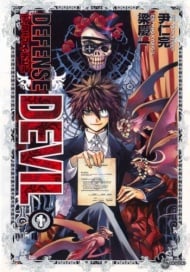 Defense Devil If anyone should ever ask me which work I see as the greatest waste of potential, I wouldn't hesitate for a moment to name "Defense Devil".This work has an excellent style and a very good presentation. I have to give him this at least. I also found some of the beginnings of the plot to be okay. I still have to pat myself on the back and praise myself for getting these 100 chapters over with. Plotholes like no other title. Not even the writer himself apparently had any interest in explaining something and simply threw something down so that it somehow fits the situation but fundamentally contradicts everything else that was previously. And this on a continuous loop. Implementation was purely amateur work. I can hardly believe that there is such an elaborate and detailed style, but the actual implementation of the scenes, dialogues and story is purely amateur work. It is definitely one of the top 10 works I've seen in 20 years that have achieved such a result. Clichés beyond my imagination. This work used more clichés than I could spontaneously list. Half of the chapters were horribly monotonous and practically repeated in terms of content. Each character had almost only 10 sentences that he played like a recording device. Especially the female protagonist. And especially the fact that the characters constantly look so surprised with sparkling eyes. Well and good, one is just surprised by something. But whenever the protagonist says something, his counterpart looks at him with googly eyes as if their worldview has changed. No lie, in some chapters this happened up to 10x and in the whole manga probably around 200x and I would probably make the effort to list it again. Fan service, if nothing helps and you fail everywhere, why not insert 5 nude scenes, 300x panty shots. And bathing scenes in between. This should make up for the lack of quality, right? These 4 would be the apocalyptic horsemen of pain that I met. But no, it couldn't stay that way. The actual main story and the characters gave me one chop after the other on a loop. Story The story is quite promising at first. One wonders first and foremost what the background of the protagonist is and how his work as a lawyer will be shaped. Well, his work as a lawyer is completely meaningless and irrelevant to the plot. So irrelevant that you could almost skip Chapters 1-15, there wouldn't be a few characters introduced. Around Chapter 30, the Hell Arc begins, which literally stretches to the end. In other words, only chapters 1-15 are associated with the work of unworldly. The rest is endless fights and fan service. The background stories were at least subtle, so at least I wasn't disappointed. As for the main story itself and the twists and turns later, that's a whole different story. That the story was immensely transparent is not necessarily a bad thing. The bad thing is that the story had a bottomless number of plotholes, a bad narrative, bad twists and turns and an extremely poor conclusion. The power system in the factory was also completely defaced, almost reminding me of the good times in Dragon Ball Z - Namek Arc. Drawing/illustration The drawings were visually very attractive, as was the design. Particularly with the weapons and characters, immense effort had been made. Backgrounds were also optically pleasant at the beginning, but rather poor towards the end. The detailed physique of the women was not held back either. Characters Where should I start? The protagonist, he is not hateful, but he is also not likeable. He is a common good guy hypocrite and has a caliber of about 30 different words in his vocabulary. And somehow it ends in one fan service scene after the other with the protagonist. He also has no depth or character development. The protagonist is by far one of the worst female protagonists you can imagine. Has hardly any dialogues, rattles the same about demons without end and is abused at every opportunity for fan service and offers no character.And once again this work has helped me to show a new perspective. The remaining supporting characters are mostly irrelevant and uninteresting. There was an interesting approach and some poorly written development with at least one antagonist, but nothing else. The opponents in this work were by far a complete waste of time. Their ambitions and their resolution have been so shallow, I wasn't even sure if that was going to be some kind of twist. Conclusion This title is definitely useful for newcomers who have neither claims nor experience. However, everyone who is already familiar with Manga and Anime is confronted with a huge problem here. So much could have been done better with this work. But where the talent or experience is missing, there is not much that can be done. Annotation! Whoever is addressed by the description of the work, no, this work has almost nothing to do with the concept of "demon world". There are only 4 different cases in the entire work, whereas one was generally only rushed because it was only supposed to introduce in Chapter 1. The second and third cases were terribly boring and the final case was only resolved by force. Say this is mostly a shounen, whose chapters are only felt with fights and with fan service.

In the beginning when i first started reading Defense Devil i thought it was pretty boring. I only read it for the action parts. But now, its all different because of the story line. I won't say what is it but during the manga there is a huge turn of event which you would have never thought of. Right now, its very intense with alot of actions. You should check it out if you have free time.

Omg, please read this manga. When i first saw it i was impressed. I loved the cover! But i thought Defense Devil is one of this mangas who have a pretty cool cover and it sounds interesting but then it's absolutely bad. But it isn't! This manga is one of the best i've ever read!! The story is incredible, the characters and the art is so beautiful! And there are so many details! First i couldn't belive it...  The idea behind the story is unbelievable. You aren't able at all to say what's happening next... With every new page you're surprised. Every time. The characters are pretty cool and all of them are completely different! I'm not able to say something bad about this manga... because it's perfect!!! Please read it!  ;D 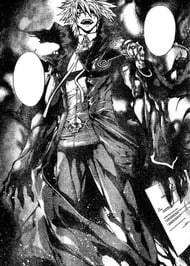