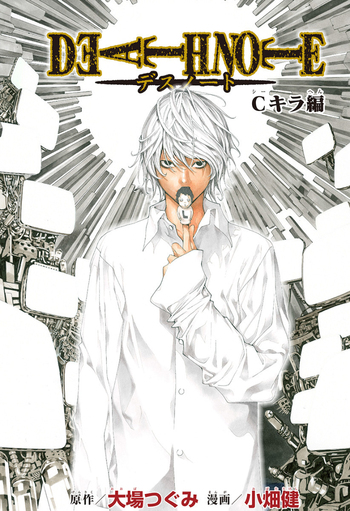 In the original Death Note, it brings up the differences between having a single autocratic ruler deciding who deserves to die versus having society as a whole decide who deserves to die. Obviously, questions are also raised about the ethics of the death penalty in general, but at its core it's showing the dangers of having laws being decided by a single person. In other words, it raised questions which could actually potentially lead to some debate. It could be argued that this manga also dealt with a topic which could lead to debate (whether assisted suicide is ethical or not), but the way it portrays it isn't nuanced or thought-provoking at all. People who approve of assisted suicide (like me) will just see this as self-righteous, condescending, and devoid of any thoughtful counterpoints. And people who disapprove of assisted suicide will just see it as reinforcement of their already-held beliefs.

And as for the actual detective work, it's literally non-existent. Near femself finds this case to be boring and not worth feir attention. Also, the changes within the shinigami realm aren't very interesting. Literally the only reason I rated it as highly as I did is because of my residual love for Death Note.

Unnecessary. There are some things in this chapter that could be considered interesting, but it's not worth your time.

No spoilers are included in this review.

As much as I loved the original Death Note manga and the series, I wasn't overly impressed with this sequel. It was very short. Only one chapter and hasn't been my favorite. With that said, If you enjoy Death Note I would reccomend reading it. The art isn't as good as the original series. It is much fuzzier and poorly completed in such a way that some charactes don't look the same as in the original volumes. However, I did enjoy this piece because you saw the same characters from the original series and got a glimpse of how things continued on after the reign of Kira. This is what made this sequel worth reading and why I would recommend it.