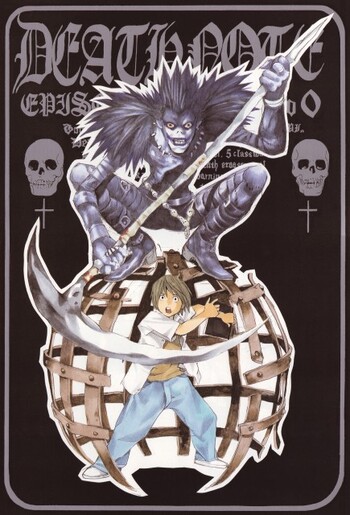 Whenever you have pilot chapters, it's always worth comparing them to the eventual series and seeing what types of improvements were made. The most obvious difference is the Death Eraser included in this one, which allowed someone to erase a person's name from the death note to bring them back to life. This was a horrible idea that unnecessarily convoluted the premise and didn't add anything of value. It also starts out with Taro writing diary entries about being bullied, completely unaware that it would kill the bullies by writing their names. This was also a bad idea because it made Taro's decision to write names an accident rather than a conscious choice, which then makes it feel less natural whenever fe starts considering using the death note to fight evil. This version also has Ryuk be a lot more engaged, even offering to help with whatever Taro needs, which longterm would probably make for a much different story than having fem be indifferent. Taro also isn't intended to be a genius and the detectives are also just normal detectives. In other words, this version doesn't include the intense battle of wits that made the series so great. Yes, there is a bit of lying on Taro's part (with fem making the detectives think the problems are over), but it's not really all that impressive of a lie. It's also worth noting that the rules of the death note and the way the shinigami work weren't nearly as fleshed out yet, most notably seen in the fact that new death notes seemingly could be received simply by requesting them.