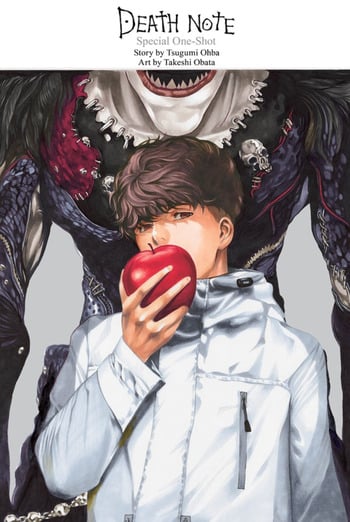 If you've read this one-shot you most likely have read the original manga, so there's no point in explaining the premise of the death note.

ART: Theres nothing much to say about the art. Takeshi Obata just knows when to do things detailed and when to keep it simple. His art in this one-shot is as great as ever.

Characters: There aren't many new characters in this one-shot, the main one being Tanaka, and even with him there isn't that much going on other than his encounter with Ryuk and how he wants to achive his goal, we just get to see how all of what he plans turns out without his thoughts on it. Saying that, it was really good to see the best shinigami ever, our beloved Ryuk, who hasn't changed a little, and even Matsuda. There were others that were brought back but these two are the ones that stood out to me, not being a surprise since it's Ryuk we're talking about.

STORY: Here, the author wanted to aproach the death note in a different way, where the MC was able to influence the whole world without killing a single person. It is true that he was only able to do that because of what Light had done before, giving the death note credibility, but he himself didn't kill anyone. With this, the story still feels the same the way as the original, with a little cat and mouse game, but now the focus is on how what he proposes influences the world, primarily politicaly. Overall it was a pretty engaging story, bringing back old characters and concepts while mixing it all with a new MC and his own goal.

Genius, loved every scene, this was well planned out, definitely worth my time

The adage with great power comes with great responsibility will forever rings true, and that responsibility being spelling doom for oneself after coming into contact with said power (death note); which was the case for Minoru... who only wanted to receive cash without resorting to the same ole Kira methods

I'll cut to the chase: if you are a Death Note fan, you will love it.

The one-shot features a new Kira and a set of old characters who were featured in the original Death Note. The cleverness of the series still hasn't lost its charm even after 15 years. The one-shot is relatively short and will only take you 10-15 minutes of reading.

That said, there are many plot holes, which by the end of the manga left me with a bad taste in my mouth, especially with how the story develops later on. This is, to my guess, a way to accomodate for the length of the one-shot, but I don't actually know the full details.

Still, if you are looking to find a new character to be attatched to, then this is the right manga for you. The new Kira is genuinely smart with how he uses the Death Note and knows how to get things his way. Sadly, he didn't get to show his side much, but I do hope to see him in the future with a sequel.

The best part of Death Note was the battle of wits, the back and forth between Light and L. And related to that, the second best part was the complicated plans they came up with--the schemes or puzzles, if you will. While this one shot doesn't have the battle of wits, it does have an absolutely excellent scheme. The main character, Minoru Tanaka, isn't necessarily the most intelligent person, but fe is very skilled at quizzes and puzzles. Fe figures out how to make use of the death note to get femself paid in a way that couldn't be traced back to fem. And most interestingly, fe never once writes any names within it. It's definitely a fun read the first time through (though it might lose a lot of the intrigue during subsequent readings).

My one major complaint about the plot is that it doesn't delve into the economic chaos that I imagine would follow these events. Like, wouldn't the infusion of that much money just cause massive inflation?

The characters are alright, but aren't anywhere near as compelling as Light and L were. And Near, as always, sucks. It was sorta funny seeing President Trump interacting with Ryuk.