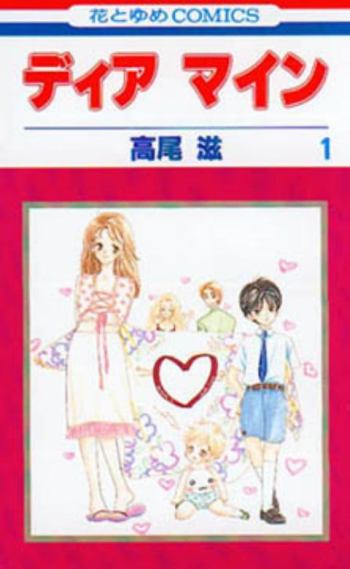 Life's hard when you're shy, harder still when you move from your quiet hometown to the bustle of a big city and a new high school. Poor Alice also has to cope with being regularly harassed by the bratty neighbor boy, Rin. Her life turns upside-down when she's stuck babysitting Rin and the annoying chore ends in unexpected tragedy. What Alice doesn't realize is there could be a greater force at work than unhappy chance!

Please Save My Earth is very different from Dear Mine, it actually has a plot and there is some heavy drama there. However, there is one thing that those two manga have in common: pairing a high school girl with a grade school boy. If you thought that this (relativly) rare motive is interesting, you should give PSME a try.

Airi has always dreamed of marrying her fated true love and living a normal, happy life – a dream disrupted forever when Aram, a prince from another world, emerges from her grandmother’s mirror. She takes the young prince home with her thinking he is a lost child, giving him a home cooked meal and a place to sleep. However, in the morning she discovers that, as the result of a magic spell, Aram transforms into a 17-year-old boy whenever it’s dark, and her kiss is the only way to change him back! If that wasn’t enough, Aram is in hiding from his older brother, the evil sorcerer Jeile, who has fallen in love with Airi and intends to make her his bride! Will Airi ever be able to find her happily-ever-after?

You know the drill: high school girl x (mature) elementry school kid. Both Dear Mine and Merupuri have this going on, except Merupuri has this whole age transformation and magic mumbo jumbo, while Dear Mine has some shoujo-style fluff instead. If you liked one of those, you might want to take a look at the other one too.

Do I need to say more? Well, I do: it has a very different take on the subject, but it's still sweet in it's own way (no "suger & fluff" though). Wait, why are you still reading this recommendation? Go read Otoyome-gatari instead.

Nike, the fourth princess of the Rain Dukedom and one who holds the power to call forth the rain, travels to the Sun Kingdom to marry King Livius on behalf of her country after losing a game of rock, paper, scissors to her three older sisters. Upon arriving at the Sun Kingdom, she discovers that the Livius, who conquered the world in only three years after his ascendance to the throne, is only fifteen years old!

Both series have a rich kid paired up with an older girl. While the romance does unfold in both of them eventually, the girl has to act more like an older sister than a lover due to the guy's young age. The age gap is greater in Dear Mine, but the duo there seems to get along better. If you liked one of the series it is very likely you'll dig the other one too.

Both of those shoujo manga are those high school girl x elementary school boy romance series. If you read one don't miss the other.

YanOta: The Delinquent and the Otaku

Saeki Kazuko is your average adult otaku who also happens to dislike men and delinquents. Yet her neighbor, Aikawa Ryuou, is a delinquent grade schooler who won't leave her alone! Her peaceful otaku days are in danger, but is there a reason for it?

Age gaps, adorable shotas, I don't see why you wouldn't want to read it!

Yankee Shota to Otaku Onee-san is more comedy-oriented, but is also really cute.

Haruka is a sweet, innocent high school girl who is very excited to meet her new step-brother, Tsukasa. Since her father works overseas, Haruka has been living alone, but now that her father has remarried, she'll have little grade schooler Tsukasa with her while both their parents are out of the country. When they finally meet, Tsukasa is even cuter than Haruka had hoped! He wants to get her help with his homework and sleep in her bed...and undress her and make love to her!?

Haruka is a sweet, innocent high school girl who is very excited to meet her new step-brother, Tsukasa. Since her father works overseas, Haruka has been living alone, but now that her father has remarried, she'll have little grade schooler Tsukasa with her while both their parents are out of the country. When they finally meet, Tsukasa is even cuter than Haruka had hoped! He wants to get her help with his homework and sleep in her bed...and undress her and make love to her!?

Shinpei is 8 years older than Hikaru, and due to her grandfather's health they got married. But does Shinpei really love her or is it just fatherly love?

High school senior, Aiko, and 30-year-old Shirakawa are to have an arranged marriage, so they decide to try being a couple for 10 days...

The childhood friend she reunites with after 4 years has become super handsome!? And for one month, the two of them will be living together alone under the same roof!?