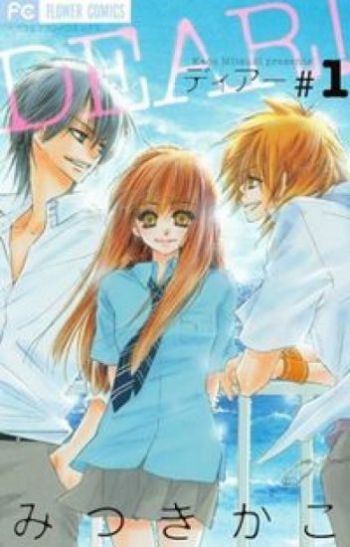 Miwa wants to get romantically involved with him, but cannot. Soon she finds herself attracted to his father. A dangerous triangular love affair goes on.

Yukari and Haruhi are the same age while Ruka is 4 years younger and they are all childhood friends. The three of them get along well with each other, but unexpectedly Haruhi confesses his love to Yukari and the two begin dating. But, Ruka forcibly chases after Yukari causing her heart to wander between Haruhi and Ruka. Although she doesn’t want to break up with Haruhi who is nice to her, she can’t stop the heat that she feels when she is with Ruka… The everyday peaceful life has turned into a continuation of storms!

The cool glasses-boy and his two beautiful childhood friends have a delicate balance between the three....

Taiyou to Tsuki no Aida de

On the day Sari transfers to her new school, she confesses her love for her cousin Kazuomi. After being subtly rejected, she find out that Kazuomi's best friend Mizuki is also interested in him. Because those two are like the sun and the moon, Sari's determination to be Kazuomi's girlfriend begins to waver. How will this interesting love triangle develop?

Koisuru Futago to Megane no Blue

The best gift for all girls is the most painful and awesome!

In the spring of Chitose's 1st year of middle school, Mika, who shares the same last name as Chitose, is transfered into her class. Mika is pretty, quiet, and sticks like glue to Matsuura whom Chitose has unrequited love for. Chitose is bothered by the relationship between Mika, who won't make any female friends, and Matsuura, who is treating Mika kindly. Meanwhile, it's been set that Chitose is going to transfer schools-!?

A 16-year-old high school girl, Michiru Isshiki, has cool childhood friends--- her next door neighbors, Ryouhei and Shuusuke Kuwa. Shuusuke, the same age as Michiru, is a pure-hearted, passionate rugby player. On the other hand, Ryouhei, three years their senior, works as a model, and is the campus crush. Because Michiru is a pure-hearted person, Michiru opposes the playboy Ryouhei, but she realized her true feelings when she saw a kissing scene between Ryouhei and his girlfriend, Youko!

About a boy who is transformed into a girl through a freak accident and is caught into a love triangle.

I want to have a normal romance. I want someone just for me. That’s all I wanted. But, it looks like I made a bad boy fall for me. The introverted college student, Hinata, becomes friends with the popular guy on campus, Daisuke. Just when Hinata thinks she is starting to fall in love for the first time, without realizing it, she draws the attention of another student, Shiro.