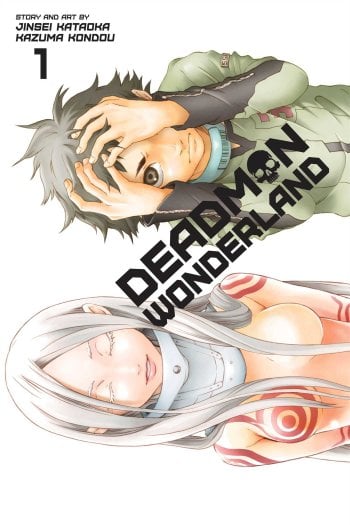 Story: Framed for mass murder, wanton slaughter and 16 other assorted accounts, Ganta is found guilty and is sentenced to Deadman Wonderland, a jail where the public can watch some fun death games and badass blood fights. Family friendly fun for all! I should also mention that it's a literal wonderland, with the jail smack dab in the center of an amusement park, complete with a ferris wheel. That's how they roll, and they're rolling in a MacLauren, one of those super fast race cars; it's that good.

The concept of jail for convicts and those with super powers who also happen to be convicts is awesome and something I totally dig. Mix in some death games and and I'm totally sold. It's pretty intense, matching and building up on the initial concepts and unleashes a hefty torrent of blood, grim scenes, tearjerkers, morbid moods, dark atmospheres and some good, mature stuff to really get the reader's attention. It sees the promise it displayed initially and it delivers.

The story itself is also worked pretty well on and provides a surprising amount of depth considering that it's death games and violent combat with disturbing consequences. No spoilers here but it really goes deep into the tale, delivering depth and actually explaining plenty, leaving very few plot threads hanging. The explanations provided are satisfying and if something isn't explained now, it will be later.

Really solid stuff and while it may drag at times, it still provides plenty of excitement and the tradition of explaining shit and providing even more backstory. Heck, it's pretty action-packed throughout with loads of fights occuring and some real nice thrills that can make you go to the edge of your seat in tension and suspension. Drama between the inmates is done really well and provide some of the best moments, especially the aftermath and the effect of said fights, especially the ones that deal with words and not fists or superpowers. Some real good moments of emotion to be had here. This is one violent blood fest you can read for plot.

Art: Excellence. Grim, gory, detailed and looks pretty smashing in it's glory. The art is solid throughout: the character designs I really liked with some of the dames providing some plotty fanservice, Shiro, gory discretion shot to go along with the actual gore and some real good atmosphere abound. And as time moves on, some characters just grow in badassery.

Characters: What I really love about this is how just about any character with some significant impact on the story or some semi-hugeish interaction with the main guy has a backstory. Crow? Backstory. Whips? Backstory. Old guy? Backstory. Flamboyant? Backstory. Hummingbird? Backstory. The significants have backstories and that satisfies my curiosity like water to a dehydrated traveller. Big props for weaving tales about all of them and with said tales dealing with how they got into Deadman Wonderland, by putting two and two together, so to speak. And by everybody semi-significant and up, I mean EVERYBODY. Pretty mindboggling actually.

With their backgrounds are the characters themselves, in the here and now. They have depth, caused by the hardships of the past and the events they have to partake in the present. More than just names but faces and flesh behind the skin, makes you care for at least a few and feelings (Take your pick) for some, if not most. Hell, even liked a few of the villains as much as some of the good guys, like that Red-Headed Priest of the Katsu discipline. Katsu being a brutal, face punching discipline. Of violence.

Can't really say I hate much of anybody here but there are a few who just don't bring much to the table, despite whatever impact they may have on the story. I don't mean the gal who works with G-Cup but another who just wasn't up to snuff with the others. Also don't mean the ones you "love to hate", which are perfectly fine as they're made to be dispicable sons o' bitches, but a few others that just seem... a bit "eh" and just aren't as good as others. One in particular but overall, can hardly complain.

At the helm is Ganta and Shiro, our tragic heroes. Tragic because it screams "gang kick these two while they're down", how they wouldn't get much slack in their journey through hell. And with journey comes development, which they have in spades. As I learned more about them and witnessed all the crap they had to go through, I came to love them and continuously root for them, wanting the best ending they could get in this fucked up world.

Overall: I frigging loved this. Extremely solid throughout, high on action and violence, tension and suspense, tearjerking moments and nightmarish scenes, disturbing and cruel yet with hope on the horizon... it's just great. Really felt for the characters and as badass they can be, they can really pull on the heartstrings with all the crap they're put through. It's certainly not a happy read most of the time but it wouldn't completely kill you with depression. A flurry of emotions with a massive dose of action, it's got loads to spare. Simply put, as sad as it got, as much of a downer as it became, I had fun with this and couldn't wait to read the next chapter as I was hooked.

Honestly, when I think about this story, it reminds me of Elfen Lied a LOT.  Humans are responsible for the mess, yet they shun the consequences.

Anyways the story is very engaging.  It keeps you hooked from start to finish.  There are a a lot of action scenes but also great backstories.

Because there are backstories to practically all important characters you get a feeling of understanding who they are.  There are some interesting personalities as well.  Mysterious, sadistic, childish, you begin to realise how they came to be in such a way.

I felt the artwork was well drawn and got any point it wanted to across so I really have no glaring complaints.

Overall I loved the story, I loved the characters, I enjoyed the artwork, and since I feel like this is similar to Elfen Lied ( which I loved as well) I'll say I had a blast reading this, too.

Now I dont read manga often, but the anime was amazing and I wanted to see more.  I had to wait for a while though while the artist was on maturnal leave.  However once I saw that it was finished I had to read it through once more and finish the story

Now in a manga, I find it hard to grasp the action.  the sounds, the voices, ect.  It was the same in this one.  However I understood enough to know that it was epic.  The final battles were great, and in the end, I was extremely satisfied.

Story:  The whole concept of Deadman Wonderland is awesome.  The story was different, and everything worked perfectly together like a cog in a machine somewhere in G Sector ( see what I did there ;)  ).

Art:  I have seen worse, but since im not familiar with many manga I will give it a 9 instead of 10.

Characters:  so many lovable characters,  they didnt deviate much, they were consistent.  Of course that doesnt mean that they didnt grow at all.  They had good character building as well.  The right characters got the focus too.  It was perfect.

Overall:  wow.  This story was gruesome, ugly, messed up, horribly sad. . . and . .  completely awesome.  It was so sad for a while that I was worried nothing would change, but with an ending like this one,  how can you not just feel better about everything in life.  I highly recommend checking this out, and lets all hope that the anime somehow manages to fix its screw-ups and be as good as the manga.  This deserves to be an awesome anime.

Deadman Wonderland is one of the anime that is so cliffhanging when it comes to the story. There are some people who make a petition to make a second season and there are some people that actually read the manga instead of watching the anime. The anime is cool but the problem is we never know until the end. For the manga, Deadman Wonderland is not much different from the anime because this is not your typical shounen. If you like Tokyo Ghoul or Mirai Nikki, this manga will definitely fit with you. So, this is my review of the manga.

The story is quite simple in the beginning. In a nutshell, the main character was found guilty after killing all his classmates and sent to a prison theme-park with a lethal game. While trying to survive, he attempts to investigate who Red Man is. If you are still curious about the story after the anime, the story takes place after the mass prison break where Ganta will meet a new character named Azami Midou. This character is never mentioned in the anime, but for the manga, she has a character with more parts. The story is a pretty basic point but the manga is more explain all the plot holes that are still obvious in the anime. It has a great battle, introducing new special powers, an unexpected twist, and brings a bit of apocalyptic and dystopian elements in it while in the anime it's a bit dark. You can read the manga in the sixth volume after the anime.

The art is truly one of the best. I didn't think if read some shounen it becomes dull or tedious. The rest of the more focused action turned out to have a very detailed art from the small detail. The anime is pretty great when comparing it to the manga but the manga takes the cake. Not to mention, Kazuma Kondou and Jinsei Kataoka neatly create and write the story to produce a great narrative that is easy to understand as well with the detailed action.

Although Ganta Igarashi is a crybaby main character at the beginning, I prefer his character development in this manga. Little by little, he learned a lot of how to sharpen his powers to how to fix his past. In addition, Ganta and Shiro are two focused characters on how it all happens, why Ganta has superpowers, why Shiro knows Ganta, and who the founder of Deadman Wonderland is. A wide variety of characters will be focus more such as Toto Sakagami, Makina, Karako Kashio, and Yosuga Mitsuzaki. Although this manga has characters with various backgrounds, some of the characters are sometimes pointless and don't get further into the story. In addition, all of those back to Ganta and Shiro because these are all about them and not about other characters.

Deadman Wonderland is not one of the perfect manga but it shows everything in an excellent way. Maybe you will don't like the anime because the story is a cliffhanger but the manga is much better than the anime. There are many characters as well as small points that are omitted in the anime and I don't know why they do that. Probably, they may only be able to cover up so many volumes that the story should be finished in there. But if you like shounen, action, and horror, you might like it. Don't expect for the second season because it will never be made. Just read the manga instead.