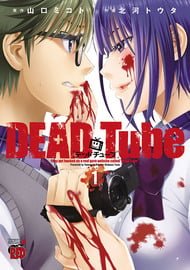 Distributing thrilling videos in secret!! A school game that puts life and death on the line!!

Review made after reading chapter 14 - unsure if I'll ever pick this up again. Story Simply put, Dead Tube is a manga series about people who film things, put the videos on Youtube DeadTube, and compete to see who gets the most views. And our hopeless main character, who is a high school student but also an expert cameraman, gets roped into participating. And through his eyes and camera, we get to see the utterly depraved shit people in this story will do to get more views. The manga rides on some ideas that better series did far before this one: the idea that only non-staged sex and violence can truly entertain the masses, as seen in Battle Royale, for example. Or the idea of playing games, where the losers amass huge debts and suffer severe punishments, like in Liar Game. Or the yandere chick dragging off a normal guy to go do weird shit, like in Future Diary or Peephole. Or the hentai-cliché of the closet-pervert (a woman who wants to be raped??). Paired with the mix of extreme violence, gore and sexual content (boobs, sex, peeing, showering and rape) that every attention-begging series seems to have, Dead Tube doesn't really bring anything fresh to make it worth reading. If you want to see people get killed in different, interesting ways, go check out Akumetsu instead, if you want gore, check out series like Berserk , and if you want sexual content... just check the tag, the entries with the worst score will probably have the most sex. Especially tiresome is the weak execution, with barely any build-up of suspense: you'll get a situation, and in the next chapter they'll suddenly go "BANG! rape and killing! problem solved! Neeeext!" There's also a number of plotholes (why didn't cameraboy get the explanation about DT any earlier? why doesn't anyone wear a mask while being filmed in the process of killing or raping someone?) that got on my nerves.  I have to admit that there lies some potential for social commentary in this story though. The ideas of "how far will people go for attention" or "how far could entertainment go" (as seen in Battle Royale too)  could be used for this kind of thing, but so far the ideas have only been touched on an extremely superficial level, and I'm not expecting this series to give us any more than that. Characters Simply put, every character in this series is a pervert in one way or another. From the crazy yandere chick, the useless camera-man MC, to all the sex-crazed side characters. They're all the worst kinds of people, and sadly most (not to say all) of them remain one-note, forgettable dolls. The only character that is slightly interesting is the MC, and even then I can't say I care much about him.  Art To end on a positive note: the artwork is very good. It mostly looks quite clean, and there are some gorey panels that looked really great.  Overall For me, this manga can only be summed up as a complete disappointment. It's a cringe-inducing edgefest with a flimsy plot and paperthin characters. If you think anything that has gore, violence, sex and rape is good, then this might be for you. If not, go look for something else, no need to waste your time on this. It might have some popcorn-value for those who can stomach all the shit in it, but most people will probably just see it as a piece of trash.

A manga for fans of the "Saw" and "Hostel" films, this is torture porn at its most self-referential. But in spite of potentially compelling material (and clearly no qualms about depicting violence or nudity graphically), the execution seems almost unforgivably amateurish. There is compelling social commentary about the de-humanzing effects of technology (and especially social media) hiding somewhere between the gratuitous sex scenes, but it's buried so deep under blood and organ meat that it's not worth finding. The authors plunge bullishly into their climaxes, completely ignoring that people read horror for the suspense, the slowly building pathos. In the end, this read is too much pay off, not enough work, to be satisifying on anything more than a superficial level.

People who like this are probably more in it for the gore and sex then the plot. Deadtube is pretty damn awful and has taught me the lesson of looking at all of the tags seriously before I start reading. the manga is like a car crash- you pass by it and you can't help but look at it. Then it slowly turns into a horrible 15 car pileup that will scar you for the rest of your life and now you know you should have looked away. 28 chapters and every single one of them has to have some kind of abuse or insane rape scene, it's basically a hentai. Except so, so much worse imo. Major trigger warning. I'm not even just being spiteful over the 18+ stuff, the plot is basically non existent to me. Everything is just super predicatable and when is that ever fun.  3/10. not even meant for the edgy Hot Topic losers.