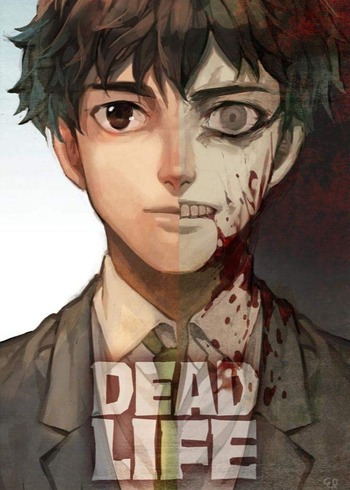 The man-eating monster 'Infectee'. I became a monster.

The MC becomes something other than human and fight to keep their humanity and hunger for humans in check.

Road to the End of the World

How to Deal With the Dead

Surviving in the midst of fear after the world is taken over by zombies.

When zombies appeared, Ye Fang obtained a super delivery system. Monsters? Zombies? Who dares to snatch my delivery items, you will need to ask my frying pan if it allows it to happen!

Starting From Zero in Doomsday

When the doomsday arrives, and the world gets dragged into chaos, zombies and monsters start appearing. The Earth gets turned into a game, humans become the lowest in the food pyramid, the prey for all superior beings. After struggling in the doomsday for three years, Kong Zhe returned back to the day doomsday arrived. He discovers that he has his memories of the past, but as time passes by he realizes that he has more cards to play than expected ....How will he survive in doomsday?

Nothing Wrong With Being a Corpse

"It's like a monster, isn't it?" The pop star was supposed to be dead, but now, she appeared before the client who wished for her to revive. Unfortunately, she has changed her form...

There's no coming back fron death, right? Of course there is, but there's a price to pay. Follow the story of a violent man who becomes a boxer and then becomes something else entirely.