Dawn of the Arcana - Reviews 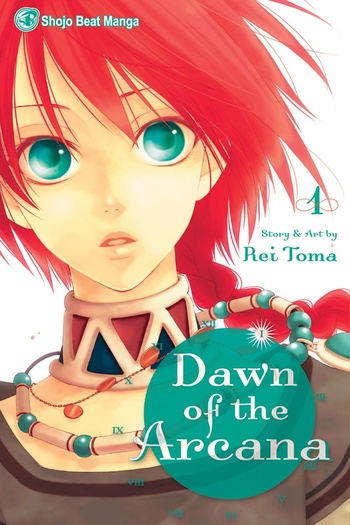 At a first glance, the manga seems like a typical, cheesy shoujo: a prince and a princess from countries that are at war with each other get married to settle a peace treaty; they also happen to hate each other. The development of the story, however, proves this notion wrong, because it's about far more than just their relationship. The hate towards each other dissipates relatively quickly (but we all knew that was going to happen) and the storyline soon shifts from Ceasar and Nakaba to the countries at war. They discover many secrets, both at a personal and at an international level, that develop into this grand scheme of pure Angst and danger. Not to fret, though, their relationship is still a main focus for the story, it's just shared with everything else. So if you're into adventure, angst and fantasy, but you're also a sucker for a good romance, then this is for you.

The manga also plays well with the themes of discrimination, abuse of power, and "created villains." People are strictly separated in both the Senan and Belquat societies by the color of their hair and their race, for example. The protagonist and her servant just so happen to fall under those two categories, whereas Prince Ceasar does not. The difference between their pasts and their current treatment highlights how much discrimination affects people, and makes for a relalistic and relatable story. The author also succeeds at character development by showing us the "bad" people's past, via the famous Arcana of Time, and telling us that they are not all innately evil, but rather shaped into who they've become. While it can be confusing at times, the story is riveting and catching, with well shaped characters and a beautiful variety of cultures and scenery in the art.

a little about the story- This story fallows princess Nakaba of Senan. during a war between her country and the southern kingdom of Belquat. As a simbol of peace, in hopes to end the war, Nakaba and the prince of Belquat; Caesar are married. the royalty of these two kingdoms all have black hair, while all other classes of poeple in kingdom have brown blonde or red hair. The princess Nakaba, though royal, has red hair and has been mocked for it her whole life. But that has made her strong and a fighter, no matter how hard, or confusion the situation gets.

The characters of this manga are great and one my personal favorites is her ajin servent called Loki. This is a shoujo manga however this is not about big sparkly eyed girls having affairs with every attractive boy they meet. This has funny embarrising moments, fight scenes, drama, rebellions, adventures, secrets, and something called the arcana. it is a power that Nakaba has to see into the past present and future, but at a price. and she learns somethings are better left unkown.

I gave the story a 8 because it can get a little confusiong and some parts are uninteresting i have to admit, but overall its one of my favorite stories. Its good if you like romance, action, adventure, and drama.

The art has a 7, its not the best but its really really well done. the backgrounds are great as well, detailed yet not overdone.

Characters got a 9, i love the designs for the characters and there personalities. there designs fit there person perfectly i think. there clothing styles are great, and each character has there own perosnality, its hard not to love them~

This manga isnt perfect but really love most everything about it so overall it gets a special 9.its one of my favorite mangas, with nearly all my favorite genras included. I love reading Reimei no Arcana! in the english version its called Dawn Of The Arcana by the way.

I liked this manga a lot. I fell in love with the two main characters, their romance was very sweet, the art was beautiful, and the series was a good length for a romance manga. There were a few things that detracted from the experience. These are mainly plotting criticisms, so spoilers are ahead, but I've been vague about the important ones.

The series was great—really great—through the end of the desert-country arc, when Nakaba told Caesar she loved him. Up to that point, the plot was solid, the pacing was fine, and everything felt like it had a purpose. And then it was like the author sort of fell out of love with her own characters and was in a hurry to get everything over with.

I should say that at the end of the series, my first reaction was "aww, what a sweet story." I was going to give this 9/10, with an 8 for story and a 9 for characters. It was only later, on reflection, that I realized I felt something was lacking. I hope this review is helpful to you.

You will be shocked. Just shocked. Wait and see for yourself. You will love this manga

Although the art style is only okay for me, the story was honestly really good. The trope for our ML & FL is common, but the background story for the characters were so good and it actually mess with my head because I keep thinking based on morals and things, which one is right and wrong. The story not the best thing I've read but it's definitely good. Would recommend this if you love political, drama, kingdom, fantasy kind of genre.