In a devastated post-apocalyptic future, Earth is a ruinous wasteland. Humanity’s only remaining strongholds are mobile fortress cities called Plantations. Massive beasts known as klaxosaurs, the planet’s new apex predators, have pushed mankind to the edge of extinction, and within the walls of the Plantations, things are no less dire. Humans no longer love or reproduce–adults live on in sterile immortality while children are regarded as nothing more than parasites, artificially created to pair up and pilot the Plantations’ giant defense robots known as Franxx. Former child whiz kid Hiro fails out of the piloting program after falling out of sync with his co-pilot, and a fateful decision to skip his group’s graduation ceremony puts him on a collision course with a horned girl known as Zero Two, whose co-pilots always end up dead. She claims Hiro as her “darling,” but what can that word even mean in such a loveless world?

Darling in the FRANXX is very famous because of it's anime, i tried a while ago to watch and I dropped it because i used to believe that it was only made for fanservice. Well, the manga so ? It's quite the same but I prefered the manga that I have finished. The issue of the anime that the manga doesnt have is the rythm of the story. The rythm is boring and too slow in the anime and as you can see with my note for the story, it's not something that you want to "taste" slowly. The manga is based on action, so it's fast to read even if the chapters are quite long compared to some other mangas. Obviously you do not have a bunch of text and you have many drawings. Darling in the FRANXX is a fast food manga, it doesnt mean it's bad but do not wait to read a masterpiece that masters the storytelling and the character development. The main focus of this manga is the fanservice. Basically, you have a shounen made for the action with mechas, you have romance, a simple "naruto"'s plot and unlike the anime, nudity. Let's say it, this manga has been made to sell (and it worked, it's probably the thing that masters the author, the ability to create a profitable manga like SAO even if it's a novel). For some reasons, it was readable because the story is short (as I said, chapters are short to read), it took me two days to read it but you can easily do it in one, count 5 hours max to read it entirely. And you really need to be slow to read it in 5 hours. Let's begin with the story. It's not very interesting and it's quite bland. The story accompanies the fanservice and not the opposite like in a normal manga with a little bit of fanservice. First point is that you cant really relate to the universe, it's not explained. You re in the fog. I would have liked to know some information that even the end dont tell you. I have the feeling that this "post apocalyptic" world is there and there are no explanations. It's here and nothing else to add. Because it was better for the fanservice I guess. As a reader, you will never immerse in the story. It's absolutely not possible. The "drama" scenes were quite useless and only added to make an attempt to deepen the story. Drama with the relationship between X and X, drama with 002 that leaves the HQ. The good point is that those drama were solved quickly so at least even if it didnt bring anything to the story, it was solved in the next chapter.. Classical example, if the manga shows you the "death" of a character, you wont never feel anything. I was surprised to react like "wait he's dead, seriously ? I didnt see it coming, well no matter". Honestly I didnt attach to any of the characters. The story in itself is a little bit original but not too much.. Ennemies were quite kind for ennemies, it's the Naruto syndrom, ennemies become kind for no reason and they help the main characters. The motive of some ennemies (the adults) were shaddy. I still dont understand them... Once again the story is really basic and it accompanies the fanservice and not the opposite so yes it's at best average. Fortunately it was fast-paced because if the story was slow and long, I wouldn't have rated this manga 6.5 but 4.5. I rated the characters 7 for some unknown reasons. I appreciated the main character that at the bravoure to do what he needs to do at least. 002 was the main good thing, her fanservice was good. The romance between Hiro and 02 was still better than in any other shounen were MC is in love with a girl, the girl is in love with MC but htey wont do anything unless the last chapter where you learn that they are now married 10 years later. (Hi naruto, Hi my hero academia later). It's probably the best thing about this manga. The author had the guts to do a real romance and not a half baked thing like any other shounens. The art is ot a masterpiece but it was beautiful as we can expect from an action manga. All in all, this manga is a fast food manga to read if you can read a manga that doesnt have a deep story. Actually if you like shounen you shouldn't be annoyed with this one. His main good thing is the romance so if you are interested in a shounen manga with a decent romance in it, you should give it a try. If you are someone that wants a deep story, deep relationships, deep character developments and drama then just skip this you will probably hate this manga. As a piece of art, this manga is quite bad to be honest. I probably overnoted it because i like romance and i'm proud to see a shounen konwn by a bunch of people with, finally, a decent romance in it.

I have to highlight cultured art of female form in the manga, because there is way more nudity in comparison to the anime. What manga also does it changes the ending for more tame happy ending. Manga is pretty short. The story pace is faster, than anime. Otherwise, it’s pretty much the same as the anime in main areas and in terms of characters. If you didn’t see the anime, what is the story about. Story is unfolding in a future, where humanity discovered new resource deep under surface, which gave it technology making them immortal, self-indulged, etc. Society changed drastically including government, which is solely in hands of APE, group of elites. Humanity abandoned surface and lives only in large mobile cities roaming mostly desert like surface. What is worse as they were digging, they also awaken monsters. The story follows group of children grown for sole purpose of fighting those creatures in mecha running on magma-based technology. This mecha requires two pilots, man and woman. What I like on the series is the fact the mecha element isn’t that important. The focus is on characters and even more on relationships. Those relationships are built into the story in a way it affects the performance of pilots. The whole mecha thing has analogy to relations between man and woman. It’s the least mecha mecha series. The story would be best described as a fairy-tale based drama in sci-fi settings with robots … and fanservice a lot of fanservice. It has environmental element to it. It’s critique of society, where meaningful life and relationships were abandoned for mere consuming for sake of pleasure. Japanese difficulty 7/10 (see my profile for details about various difficulty scores) This series is one of the harder for reading. It isn’t as hard as Tetsuwan Birdy, but still. Aside from no furigana there is a lot of theme specific language. After getting the first volume some years ago I did put it away after few pages, because it was too difficult for me at the time. It isn’t consistently difficult, but there are occasional pages describing the technology. When I got time to read the manga properly and after improving in Japanese, I did enjoy reading this manga adaptation. If you didn’t enjoy anime ending, but did enjoy the series before that point, the manga is a good option. On the other hand, if you are going into the series for mecha, then you are more likely to be disappointed.

thanks for the fanservice, I hated every second of it. no, seriously, it just made me so uncomfortable while reading and kept me from enjoying the actual story. I hate Ichigo. that's all. 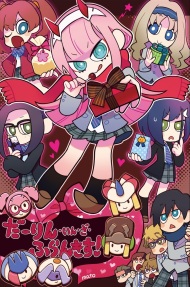 DARLING in the FRANXX! 4-koma 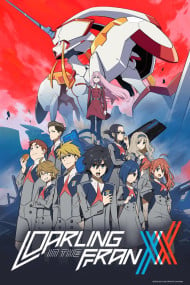