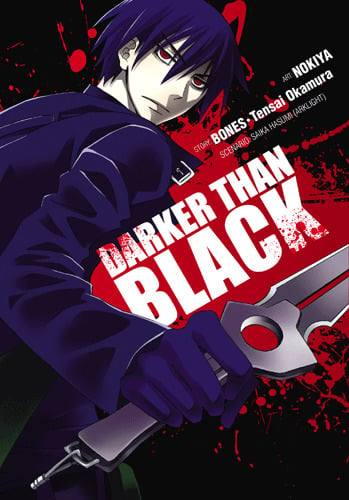 Have to say I am dissapointed. 20 bucks spent and Hei gets a soul and feelings for a girl who he should have killed. So basicly I was expecting cool Hei and he was ruined. So sad. It will look nice on my shelf but there is no need for you to read this.

Darker than Black was one of the first anime I watched. So naturally,  I was super excited for the manga. But it was nothing like what I expected and not in a good way.

I didn't enjoy the first few chapters at all and the only reason I gave the story a 6/10 was because the story really picked up from when November 11 makes an appearance.

The only redeeming factors in the story were the characters of Hei, Mao (he isn't there much but he was still funny)  and Krang. Also the relationship between Krang and Misa was amazing.

I also thought the ending was spot on specially because it ends up with Hei and Kana going their separate ways. Simply put,  I hated her character. She was a silly useless girl who did nothing but get in the way. Thank God she's not in the anime.

I thought the "Darker than Black" anime was a kickass action show, so I was thrilled to find the manga (it came second, just saying). I eagerly read it, and can easily say...

THEY TOTALLY EFFED UP THE ANIME!

Story: There are basically two intertwining scenarios in the manga's two volumes. The first follows a young girl named Kana. Her dad is dead, but, one day, she sees him walking down the street. Kana is startled, but then is determined to find him once again. Her only lead is the name he said--"Klang." (At least, I THINK it's Klang. I don't really care.) She's strolling along later, when she sees two men fighting with cool powers. One of them is Hei, who, unlike Kana and Klang, was IN THE FREAKING ANIME. Then blah blah blah, sh*t happens and Kana becomes a useless bitch. In the second scenario, November 11 (from the anime, hallelujah!) and Klang fight because Klang (oh my GOSH that is a stupid name!) loved a girl and now he OH I DON'T CARE. However, lovely little Kana here proves herself as an even bigger useless bitch.

None of this ever happens in the anime, mind you. Which could be good, but these dumb stories are just that--dumb.

Art: Actually, the slick art is the only thing which could bring back memories of the anime; it looks pretty damn good. However, Hei's character design is very fluctuating--on occasion, he looks like a 15-year-old kid with a mature adult's eyes. It's pretty off-putting. And, as if the artist knew this manga would be inferior to the anime, he/she tried to make it more appealing by showing Hei's bare back. Not bad by any means, but a far cry from the mysterious masked-and-caped assassin of the anime. Oh, and is it just me, or do his coat and pants looking tighter and shinier? Kana's design is generic, but at least she LOOKS her age (which is, what, 16? Tops?). Mao looks like a freaking girl, but at least he's still a cat. Unfortunately, his design is absolutely laughable. Klang looks like a [insert name of certain punk-goth store HERE]-reject. November 11 looks like... a youthful November 11. But having adult characters look like kids is just weird. It's difficult to compare the fights, but the fights in the manga are barely there, and blood is not shown in any sort of detail. Colors are brighter (meaning, not a lot of shading/or screentone) than in the anime.

Characters: What is this blasphemy?! No development and practically no backstories, of course, but that's not all.

(Obviously, it's difficult to find pictures of the characters from the manga because they're so different from the characters of the anime.) This would be Hei. Doesn't he look like a teenager?

Hei: Hardly called Li, except for in the gag part, Hei is hardly the antisocial mystery man of the anime. He is often seen without the mask (no more mystery!) and is way more talkative. Plus, without his Li character to complement his Hei character, (except in, of course, the gag part and 4-koma at the end), he seems more... flat, somehow. Overall, I do not care for Hei 2.0.

Shino Kana: She is not a character in the anime, and that's good, for she got on my nerves SO MUCH! She tries to be a helpful person, when, in reality, she is just a whining little girl. As I mentioned before, this useless bitch serves no purpose. I hope she can find better things to do than bothering Contractors into helping her with her petty problems. Sheesh!

Klang: He's the main villain (and another manga-only character), but is weak in the first scenario. In the second he's weak AND annoying. His love for Misa could have been touching, had he not been so much of a douche in the end. Only upside? Not an anime character!

Canon-chan: KAWAII! But that's it, because she's a doll who can't think for herself, or she's something else which may be considered a spoiler. Ah, and she's yet-another manga-only character.

Misa: I forget her full name, and I don't care. Manga-only and thank heavens for that, she basically does nothing but lay around before she finds a reason to commit suicide in an incredibly predictable plot "twist."

Mao: Submitted to a minor role (and girly design), the subtly badass cat from the anime revives as a pointless version of her--himself. He is no longer such a cool character.

November 11: Minor character, which bites, because he showed promise of being like his anime version. Sigh.

Kana's father: Manga-only, HOORAH, but seriously. He should probably go kill himself. Thank you in advance, sir.

All other manga-only characters: Hi. Bye. No one cares about you, anyway.

Other anime characters who showed up (Yin, Huang, Amber, Cosplay Otaku Girl, and maybe somebody else): Who? They were sorted into very minor roles (Huang), chapter pictures (Yin), or 4-koma (Cosplay Otaku Girl and maybe others). Damn.

Overall: Absolute crap, especially when compared to its awesome anime counterpart. Don't bother with this; it isn't worth it.