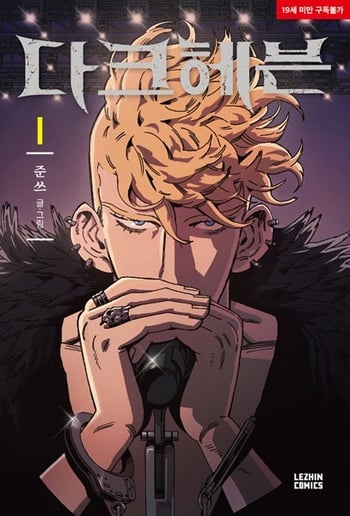 Conor, a Korean-American, lives in a city where same-sex marriage has been legalized, but where racist and homophobic hate crimes are still frequent. He joins a band with the blonde hair, blue-eyed Simon and the two go on to create their own “dark heaven” in an abandoned church. Feelings develop between the pair, but light cannot dwell with dark, and their time together will soon come to an end...

Without a doubt one of the best BL manga I have ever read. What stands out the most to me is the mangaka's ability to create a compelling story without relying on the usual BL/romance tropes (there is one cliche in the storyline that stands out to me, but otherwise the plot and characters are refreshingly different), as well as the truly loving relationship between the two MCs. It was a bit hard for me to get into it at first, because the story starts out at the lowest point in the characters lives and relationship (after a bad breakup), and I really disliked Simon at first. However, as the story progresses and the mangaka shows you how much the main characters truly love and care for one another (not just lust for each other, but really truly treasure each other), you can't help but cherish them as well.  The storytelling is also great. The pacing was very good, and I never felt like the mangaka was dragging things on for two long or inserting drama and misunderstandings just to spice things up. Everything that happpened in the story felt planned out and connected, There was a strong, continuous plot instead of a bunch of separate arcs. There are a lot of flashbacks, so if you really dislike flashbacks then you might get frustrated. That being said, I thought that the flashbacks were used appropriately and contributed a lot to the story. They were interspersed throughout the entire thing, the appearance of the characters made it clear that a flashback was occuring, and I never had that feeling of "ugh when will we get back to the main storyline".  This manga also approaches the issue of homophobia in a different way than I normally see. Homophobia is a common enough theme in BL manga (at least in any manga that is trying to approach the genre in a realistic way). This is usually portrayed by bullying, parental rejection, etc. Things that are on a person to person basis. This type of homophobia definitely exists in Dark Heaven, but it the real focus is on systematic prejudice (against gay people, and also against racial minorities). This is homophobia as part of the culture, where it is spread by politics, the media, and hate gangs, and neglected by law enforcement. The mangaka does a very good job of tackling that issue and making it the backdrop of this manga. The story is set in a made up country, but it feels like a setting that I could easily find in the Bible Belt of the US and many other places throughout the world.

It was alright I suppose for a 82 chapter read in one sitting, I wouldn't consider calling it that great or a masterpiece. It's rather predictable, art is mediocre and the development of the relationship between the guys was rather too quick to my taste. Also there was no music included in this manhwa so that was a bummer too.But hey I do recommend this to everyone who liked the "Given" series, which also involved BL in boybands ...