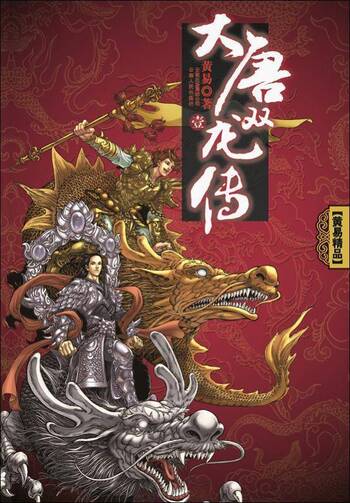 If you're looking for manga similar to Da Tang Shuang Long Zhuan (Novel), you might like these titles.

Gao Jianfei: A naive martial arts genius, exploring the martial arts world for the first time in his life. Zhu Meng: A man's man who lives by the sword, but who is more passionate and emotional than he realizes. Sima Chaochun: The most famous martial artist in the world. Completely and utterly righteous. Or is he? Zhuo Donglai: The brains behind Sima Chaochun's brawn, who always has a trick up his sleeve. And the most fearsome weapon under heaven. Heroes Shed No Tears is a tale of friendship and love, of loyalty and betrayal. Secrets upon secrets will be revealed; pay close attention, and you might be able to unravel the mystery before the characters do!

The Deer and the Cauldron (Novel)

It tells the story of Trinket, an irreverent and comic anti-hero, and his adventures through China over more than twenty years at the beginning of the Qing dynasty. The story spans vast territories, from desert islands to northern ice fields, from Peking and the Imperial Court to the sacred mountain of Wu-tai-shan to the legendary Shaolin Temple to the boudoir of Princess Sophia.

Dragon Fifth is a powerful lord with incredible martial arts, and yet is wasting away from a fatal disease. The only medicine which can cure his sickness lies in the clutches of his venomous ex-wife, Madam Lovesickness, and is guarded by seven dangerous killers, fugitives of the martial world. Into this treacherous love spat tumbles Liu Changjie, a skilled martial artist who loves drinking and women, but has a mysterious past.

Fu Hongxue was a cripple, born with a lame leg and subject to epileptic seizures. He was also one of the most powerful, legendary figures of the martial arts world, with a dull black saber that was second to none. His fame made him a frequent target of challengers, but whenever his saber left its sheath, only corpses would remain in its wake. One day, however, Fu Hongxue rescued someone whom he should have killed…and in doing so, set of a chain of events and a conspiracy that would rock the world.

Upon the death of multi-millionaire playboy Sun Jicheng, Jinan city suddenly becomes the center of a maelstrom of Jianghu intrigue. Once again, the mysterious death and/or disappearance of some of the most powerful and famous martial artists in recent years, such as the “End the Heavens, Destroy the Earth” crime-fighting duo Gao Tianjue and Guo Mie, and the master thief “Laughing General” Li, come to the spotlight. Smack dab in the middle of all the plotting and fighting is Ingot, a scrappy beggar who is far more than what he seems.

Why is she so unlucky? She just happened to bump into him naked and he had been chasing her for five years! Her eyes were all fixed on his evil beauty’s face at all time and there’s no other part where she was looking at, that she shouldn’t be! After years of chasing, she was finally “blocked” by him and brought back to the famous killer building in Jianghu by this murderous man. But this man doesn’t understand what was going on. His eyes were glued to her all day long and seemed to be the only one in his eyes. Letting her heart crisp and numb so she never thought of running away again… Until his emotions broke out, but he was holding back the desire of her body and avoided her. She knew that it will be alright if she could just let him endure one night just like he used to, but she was so distressed that she couldn’t let him suffer alone…