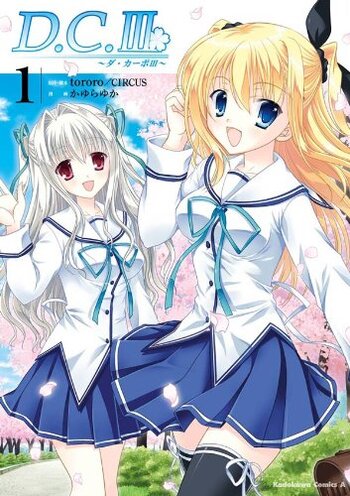 Does the new girl in Riki Naoe's life need his help, or is she actually trying to kill him? After a chance encounter on a rooftop brings the enigmatic Saya Tokido into the Little Busters' world, the only thing that's certain is that trouble is sure to follow. As if saving the lives of his teammates wasn't enough of a task to handle, now Riki must also untangle a web of new mysteries that seem to be rooted in his own personal past! Who are the Dark Executives, why do they want to keep Saya and Riki apart, and what is the nature of the secret treasure that Saya seeks? Sometimes, answers lead to even more questions as Riki and the Little Busters discover that they weren't the only people drawn into Kyousuke's artificial world in LITTLE BUSTERS! EX!

Unaired episode included in the 1st and 5th DVD volume release of Demonbane.

At the prestigious Ourin Academy, girls have put down their makeup bags and picked up weapons due to the school’s violent takeover by the beautiful Kusunoki-sensei! Though some fight for her cause, Fujikura Nagomi and Sakurano Yuu are acting as the protectors of the school and are trying to put control back in the hands of the president. With flying attacks to dodge and nefarious schemes to be foiled, can the girls help remove the school from the hands of the enemy?