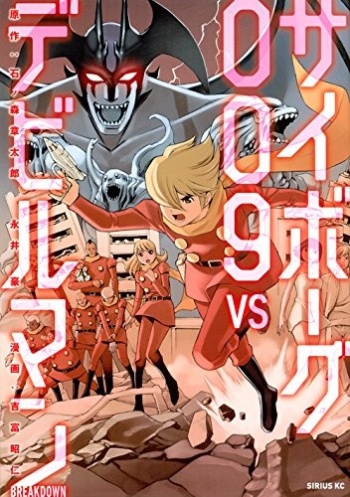 Set in the near-future, a little-understood form of matter known as "Mile One" allows a powerful and influential Japanese family, the Gowa, to produce a bipedal weapon which they refer to as a Tactical Armor (TA). At this time, a war breaks out between the US and the fictional Middle East country of Belgistan, much like the Gulf War. When US military forces attempt to seize the capital, they are systematically wiped out by what appear to be rival TAs. The Gowa Family seizes this opportunity to demonstrate their weapon system, and civilian pilot Yuushiro Gowa and the military squad to which he is attached are deployed to Belgistan. There, he meets rival TA pilot Miharu, with whom he seems to share a deep spiritual bond.

It's been 6 months since the L5 Campaign, the conflict that pitted humanity vs aliens with the whole earth sphere at stake; even thought at that time humanity joined forces as a whole and fought valiantly for it's survival, now that the true threat is gone the remains from old conflicts that have kept discord among people from even before the aliens arrived have started to resurface and thus the fight is far from over....

One night right before summer vacation, Daichi Manatsu, a second-year in high school, sees a weird round rainbow floating in the sky above Tanegashima and ventures there alone. He has seen this rainbow before. With the memories of his father's mysterious death and an encounter of a mysterious boy and girl, Daiji arrives on the island while the alarm of a building labeled "Earth Engine" is going off. Someone asks him if he's a captain, just as robotic intruders from Uranus called "Kiltgang" arrive. The battle around the shining stars is about to begin.

Based on the Toei anime version of the 70's, crossover with Devilman, Mazinger Z, Great Mazinger, Grendizer, Cutie Honey

It is the year Universal Century 0079, in a space colony the Earth Federation is storing and testing a new piloted robot for use in the battle against the Principality of Zeon. The experimental RX-78 Gundam mobile suit is scheduled to be transported to Federation command in Jaburo, deep within the Brazilian jungles. Unfortunatley, before the transporter would arrive, the Federation would come under attack from Zeon. With few resources available against the Zeon’s most mobile mechs, Federation forces strike back using their new weapon, the mobile suit Gundam. Caught in the crossfire is a young teen named Amuro Ray. Not willing to see innocent people die like this, Amuro crawls into the cockpit of the closest machine around him. Whether it be a tank, jeep or jet, he was going to use it to help stop this slaughter. And what he happened to slide into was another Gundam. Having never operated a machine like this, what are the chances he can do anything to repel an experienced squad of mech-piloting invaders?