Curse of the Three Sisters - Recommendations 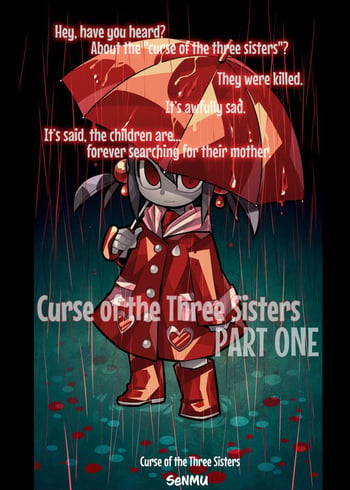 If you're looking for manga similar to Curse of the Three Sisters, you might like these titles.

When You Grow Up

Hey, you want to be a "florist", right? Don't forget it when you become older...

Both stories involve scary little kids scaring people, with a dash of horrifying murder. In Curse of the Three Sisters, the spirits of three murdered sisters haunts a quartet of high schoolers who break into their abandoned apartment. In When You Grow Up, it's the specters of the past that brutally attack four young women for forgetting what they wanted to become.

What started for Nozomi as a simple walk home from school with her friend turned into an absolute nightmare. It repeats over and over again. Is this all a dream? Will she be able to escape?

The story of a guy living in a haunted house whilst Kinako-sama, the earth-bound spirit, is trying her best to scare the living hell out of a guy who can't see ghosts.

When a young girl who has been able to see spirits all her life accidentally reads a cursed manga, she is fated to die that very day. Scared at the prospect of her imminent death, she flees from the classroom and bumps into Keita, a lively ghost who immediately falls in love with the terrified student. Now, the girl must find a way to break the curse put upon her with the help of her new paranormal admirer, but exactly what is Keita and why does he have no memory of his past?

The young man's new apartment is haunted, but as it turns out, even the dead have their own personal shortcomings... issues of the flesh included. For the dead have lingering desires, and are more susceptible to the world of the living than what one may think. There's anger, there's hate, there's curiosity... and there's love too. Here he finds a ghastly girl who observes him quietly, certainly desiring something...

Smile, It's Just a Dream.

This is a cruel, gloomy, and bizarre story about a certain midsummer dream. "This feeling is unrequited that it made me suffered... So I kill that person." It was that kind of dream that Kanae had been witnessing...