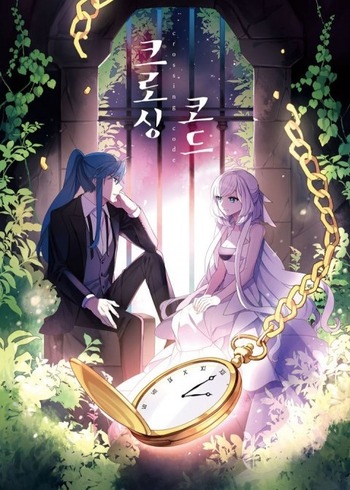 They call her Saintess, a mystical and beautiful holy figure that guides the nation. Suddenly one day, her body has switched with a flippant, crude womanizer! To conceal the emergency, she’s sent to hide at a college as a normal student. But how is that possible with a scheme to get rid of her and all these hearts aflutter at school?!

Aww... The fact that this series doesn't have any reviews yet hurt my heart. So let me do the honors. Story: I honestly started the series to fulfill my trashy needs with not many expectations. "Body-Swapping" genre doesn't have the best image and most fantasy series nowadays use almost the same formula. But imagine my surprise when I found out that the plot contains much more than two people swapping their bodies and then falling head over heels for each other! The story starts with a town festival being held in honor of The Saintess's, Lea's, birthday. The Saintess is considered as a really important and lovable entity in the said world, especially since she can make something called "Saintess' stones" which can provide fire, electricity, magic...you name it. Lea, the saintess in question, is shown to be living in a castle with servants and her attendant, with all her needs taken care of presumably but she is not allowed to step outside and thus she longs for freedom. Next thing she knows she wakes up in the body of a guy who seems to be her total opposite (flippant, crude womanizer as the synopsis puts it). Her attendant finds her and tells her that her's and a guy named Cillian's souls have been switched, probably as a scheme by the royals to cause chaos amongst priests and to avoid confusion and chaos among everyone, she should enroll in a school where royals won't be able to harm her till they find a solution. And so her life at school starts! I know this in itself sounds pretty generic and cliche but her school life is just the first part of the story. Lea and the friends she makes at school soon find out that there's much more sinister about the world they live in than they could ever imagine. The story goes through a LOT of twists and turns and even tho the first part where Lea is adjusting to her school life may seem a bit slow, the story picks up its pace fast and reaches a satisfying climax. The story is much darker than it first appears at a glance. It's definitely not your average fantasy romance. One of the things I like about it is that romance is actually a sub-genre of this series (I apologize. I have a personal vendetta against romance). It's mainly a fantasy, drama with a little bit of revenge thrown in it with romance on the side.  So DISCLAIMER! If you cant stomach dark themes, you might want to skip this one. Character: Characters are definitely one of the strong points of the series. We all know and have read series where the author spends all his time developing the two main characters and forgets everyone else and there's certainly nothing wrong with it but I, personally. love it when a series explores multiple side characters so that they would have their own personalities instead of just...being there. Before starting I thought the MC of the series is gonna be another naive, sheltered, poor, innocent girl but I was pleasantly surprised by Lea. **Mild spoiler** She is much more strong and badass than she first appears to be and I LOVE ME A STRONG FEMALE MC!! Cillian, the guy she swaps with, is a crude, annoying little good-for-nothing who has a problem holding even one decent conversation with Lea in the beginning. But as we go through the story more and he gets more character development, he changes quite a bit and even ends up becoming one of my favorite characters. All the friends that Lea makes as Cillian at school have pretty colorful, distinctive personalities as well. Eunice (who is another one of my fav), Illy, Julia, Anna...the author took time with every single one of them. Eliath, Cillian's childhood best friend who helped Lea the most at school adjusting (who I guess can be considered the 'ML' of the story) was an interesting character as well. His character, I will be honest, isn't my most liked but hey that doesn't mean he is bad or anything...Just felt he was a little lackluster compared to everyone else in the story.**Mild Spoiler again**Gotta say, the adults in this series were one of the shittiest I have seen, and trust me I have seen a lot of shitty adults both irl and in manga and manhwa. I can basically count the number of decent adults that can be found in the story on one hand. However, the whole society shown in this imaginary world actually draws a lot of parallels with our world of older times. So it's not exactly bullshit. That's just how people were before (and still are to some extent), sadly. Art:Crossing code has a solid crisp art, very similar to the manhwa "Empress Cesia wears Knickerbockers" (another good series). All the scenes are well-drawn and I liked the character designs of everyone. The art usually has a bright, upbeat color palette which actually contrasts the darker scenes very well.Overall: All in all, crossing code is very much worth the read. The author managed to tell a somewhat complex, dark fantasy story in just 62 chapters without there being any pacing issues for the most part which in itself is a big feat. Am I praising the series too much because I finally find a decent fantasy, gender-swapping story amongst all the cesspool of trashy isekai I usually read? Maayyyybeee a teeny tiny bit. But that still doesn't change fact that Crossing Code was a genuinely good read and deserves to be picked up by more people!