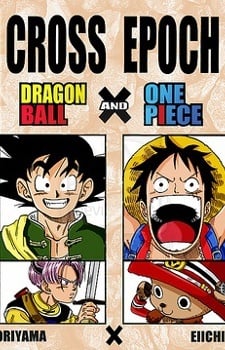 We see the various characters from One Piece paired up with characters with similar traits from the Dragonball universe, as they all travel from distant locations to meet up. Other than just seeing these two universes and art styles smashed together, there are two points of entertainment in this story. The first is the build-up of tension as we're made to wonder what they're meeting up for, with the eventual relief as that question is answered in the final pages. I suppose I won't spoil the ending, but it's enough to say that it wasn't worth it. Are these crossover manga ever worth it? Anyway, the second point of entertainment is the admittedly small amount of curiosity at which two characters will be paired up with each other along with a feeling of oh-yea-I-guess-those-characters-are-pretty-similiar-huh. Seeing Nami drawn side-by-side with Bulma really accentuates how horridly caved-in the stomachs of the One Piece women are.

I wasn't sure whether I should rate the characters as a "1" (since if this manga was read without prior knowledge of these characters, that would be fair) or if I should rate it as a "9" or "10" to reflect what I think about the characters within the context of their original manga. I ended up deciding to judge the characters within the isolated context of this manga. But even if I had chosen to rate it the other way, I still would've rated the Overall score as a "1" since I didn't find the manga enjoyable in the slightest, so it's not like the Character score would've changed anything.