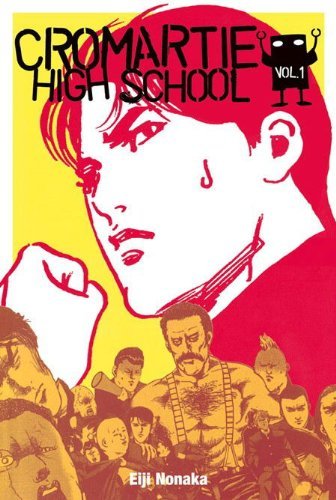 Delinquents. In real life, we pretty much stay the hell away from them; certainly in my local town if you see a rough-looking chav* you avoid eye contact and dive into the nearest bookshop. However, when it comes to fiction, none of that matters, especially when considering the gang in Eiji Nonaka’s seventeen-volume work Cromartie High School. They probably couldn’t organise their fists to punch you in the face. With its vibrant Pop-Art style covers, this manga immediately catches the eye, but what lurks inside is a treasure trove of comedy gold that will have you laughing like a drunk pirate at an open bar.

With zero overarching plot and no particular direction, Cromartie focuses on the everyday musings of a group of high school boys to create pure comic slice-of-life. The dialogue that dominates the majority of this series verges on the sinfully dull when examined closely, yet this remains one of the most hilarious manga that I’ve read to date for one simple reason: the mismatch between the content and its players. The entire cast consists of badasses with fewer brain cells to rub together than the average primate – something frequently proven by the school’s resident gorilla when he regularly outwits his classmates. As the equivalent of seeing your sweet little old granny getting down and dirty to some gangsta rap, the juxtaposition of these hard-as-nails miscreants discussing subjects that even a particularly bored middle-aged housewife would find too trivial offers up countless opportunities for humour. Never before have conversations about unknown theme tunes, antenna headbands and nose hair been so amusing as they are when discussed by delinquent teens.

Working in tandem with the everyday feel of the cast’s conversations, Nonaka also takes chapters to focus on individuals instead of the group. During these sections, he makes great use of internal monologues to highlight some of the cast’s biggest eccentricities. Yamaguchi’s musings on the definition and importance of comedy and Fujimoto‘s deluded belief that he is a computer pro, shine an entirely different light on characters that would otherwise make little impression as nothing more than mindless thugs. Whereas Takenouchi’s struggle with motion sickness and his attempts to keep it from his classmates, gives an altogether more human side to the school’s “boss” and facilitates the inclusion of many humorous situations.

Amongst the inane babble and conflicted orations, several recurring jokes worm their way into the fray, offering up the occasional foothold amidst the whirlwind of episodic content. Some of these ongoing gags are fairly simple and self-contained, like the constant interruptions that “Hokuto’s Lackey” faces when attempting to introduce himself or tell anyone his name, whereas others take on a life of their own, such as the mystery of Mechazawa. Throughout the course of the series this amiable robot has many unfortunate incidents befall him, with each one confusing his classmates all the more. That the mechanical delinquent remains a complete enigma is his main selling point.

While the majority of Cromartie consists of casual discussion, recurring gags, and anxiety-ridden internal monologues, Nonaka occasionally throws in the odd curve ball for good measure and comes up with a plotline so inherently bizarre that it really shakes up the pace. One such instance that springs to mind is that of Hayashida’s “adventure” as he plummets down a ludicrously deep manhole during a fight with some rival delinquents. Waking up in a jail cell, the Mohawked teen finds himself slap-bang inside an epic Planet of the Apes parody in which he plays the role of the apathetic and unwilling hero. Reminiscent of Monty Python’s “and now for something completely different”, Nonaka’s use of random situations means that the reader never quite knows what the Cromartie gang has in store for them next, which keeps the whole manga fresh and entertaining.

Continuing the stark contrast between the subject matter and its cast, Cromartie’s artwork only enhances the comedy. Nonaka’s style screams “manly badasses” in a deep burly voice tainted by years of chain smoking and heavy drinking – even Toriko would be impressed. Instead of clean, neat mark making and careful hatching, the mangaka uses sketchy lines and looser, almost scribbly shading to give a rougher, tougher and all together edgier appearance to the imagery that really pounds home just how delinquent these social misfits are.

When it comes to character designs, Nonaka manages to show variety in the cast’s appearance while making a conscious choice to give each individual the same basic face. While differentiating the shape of each head and varying distinguishing features a little, everyone, whether delinquent or not, bears the standard furrowed brow, hard-as-nails eyes, frowning lips and distinct manly nose. Generally this would be considered a huge deficit, but in this case the uniformity of the visuals works in the manga’s favour. By having so much familiarity in the appearance, the subtle (and not-so-subtle) differences make the primary players stand out all the more as well as adding to the humour. For example, Hayashida’s Mohawk immediately identifies him from the crowd while his slightly upturned lips and the emphasis on his chubby cheeks reflect his likable yet inherently thick-as-shit personality with ease. Likewise, Maeda’s particularly pronounced and hairless brow mirrors his position as the most traditional delinquent of the gang as well as providing fodder for the ongoing jokes surrounding his mother and her worryingly masculine appearance.

Oh, where to start… Eiji Nonaka packs Cromartie full of memorable characters, from the Gorilla whose intelligence frequently outshines that of his classmates, the mute and mysterious ‘Freddie’, and the enigmatic robot Mechazawa to plane hi-jacker turned fake high school student ‘Masked Takenouchi’. With every new character comes a whole host of eccentricities that keeps them fresh, such as Hokuto weaving an intricate web of lies due to his stubborn refusal to admit that he enrolled in the wrong school. Take Fujimoto who leads a double life as a ruthless and violent thug at school yet becomes an excessively polite and considerate man when posting on Internet forums. With so many oddities amongst the cast, Nonaka has an endless pool of comic potential on every page, and he never fails to dive headfirst into it.

While an understated character, Maeda holds a special place in my heart. His relative level-headedness within the group means that his reactions to events that surround him are priceless. Though one of the more genuine “badasses” of the series, the poor sod gets initially shunned for not having a nickname during middle school and subsequently ends up at the class’s whipping boy, with everyone using his house as they please or dismissing his logical reasoning. What truly makes his character, though, is his habit of getting caught up in the whirlwind of nonsensical events and mindless banter before realising too late that it’s actually a bunch of bollocks. In this sense Maeda proves easy to relate to; his returning home and mulling over the dealings of the day only to realise that none of it makes any sense feels like the equivalent of stewing on an argument only to think of the PERFECT comeback about three hours too late.

Sadly, only the first twelve volumes of Cromartie are available in English as ADV shut down before the entire series had been released. Likewise, scanlations haven’t gone past what has already been licensed, so eat up whatever you can get hold of. Nonaka skillfully weaves together several strands of amusing content to create a veritable patchwork quilt of comic brilliance. Using a few yards of ordinary conversation from the mismatched scraps of the cast and several squares of inexplicably fluorescent plot diversions, the mangaka creates his base. He then sews this all together with the characters’ intense seriousness and sincerity about their humdrum babblings, finally decorating it with the boys’ cross-stitched idiocy. The result is a unique and bizarre-looking creation that you can’t help but love and snuggle up in on a cold winter’s day, treasuring it for years to come.

*For those of you who have no idea what a chav is, don’t worry. In all truth you probably don’t want to know.