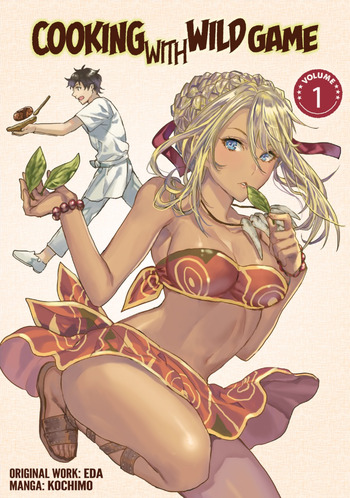 "There's no such thing as good or bad food," Ai Fa says, displaying feir attitude that food is merely sustenance. Of course, a budding chef like Asuta can't just take that lying down.

Asuta is thrust into another world, a world of hunting and gathering and clan politics. Or at least that's the type of world it is for the giba-eaters, refugees from the war who are only allowed to hunt giba on the mountain and nothing else. Giba is a tough and chewy meat, but Asuta uses feir cooking knowledge from feir previous world to create dishes that everyone can enjoy and that serve as more than just sustenance. First, fe gets Ai Fa to admit that feir food is delicious. Ai Fa especially likes feir burger patties. Then fe cooks for other larger clans and develops a reputation as a capable firekeeper. How far will feir reputation spread? Will feir cooking change the world? I guess we'll see, but so far I've been enjoying the ride.

Also, Asuta and Ai Fa have a romance set to Low Heat.