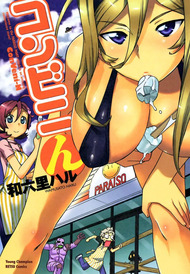 The story revolves around a convenience store "Paraiso". The store was once very successful and attracted quite a crowd because of its "unique" employees. But suddenly, various weird mishaps started happening one after another in the store, making it lose its popularity and making the customers believe it's cursed. A fresh college graduate, Ichinotani Hikaru, going to a job interview, somehow ends up getting forced into a job in this store. What kind of fate awaits him now?

642 users are tracking this. Log in to see stats.

Story: It's nonsensical, it's stupid, it's shamelessly perverted in it's perverted progression and it's crazy, absolutely bug nuts absurd. The progression is progress, it continues as if it's natural and it does feel natural in a way. It flows, doesn't feel disjointed or frazzled but what's in the flow is a load of crap. It's- Ugh. A convenience store, run by ****-san (No, really. Unless you want me to call him Manager) who gets hit by an 18 wheeler, on a green light, while the driver was sleeping off a booze run (Fabricated). I'll keep this brief. Guy fucks up, gets blackmailed to join the ranks of the store. Not really on his part, but he does fuck up in a way. I don't want to spoil it because it's entertaining in it's own shameless way, but it delves into nonsense and quite the ending. I'm sure it's what you would expect, after sitting through the plot advances of yesterpage but it's... conventional? But who cares. Important part is that it's funny. The plot may be crap but I liked the writing and the perverted hijinks. It's extremely perverted, to the point where I wondered a few times what the fuck I was reading. Laughably perverted, so prudes against boobage and fanservice stay away, as the N stands for nipples. Art: Hohoho, most excellent! If I could megusta, I would. Excellent fanservice, I liked the character designs, the Native American, how everything wasn't cluttered with detail and it sure looked good. Style, and once again, completely without shame. But it got a 9 for some of the greatest usage of ice cream. Characters: One volume, senselessly perverted manga, fanservice, nonsensical plot, boobs, what do you expect? On one hand, screw development and depth. That's for manga that don't need boobs or any of that fine ass stuff. On the other hand, I do believe they mesh well together, and the Native American is a personal favorite. The score is based on development (Ouch), chemistry, that thing that's... or what they do (Misc. Algorithmatics) and I'd add what they say but that's for plot. You're not so much here for the characters and what's within them but the characters and what's on the outside, so be shallow. Overall: It was fun and I had a ball but I can't neglect it's flaws. It's stupid, it's relentlessly perverted in implications (Ice cream again), relentlessly perverted in general, nonsensical plot, a questionable conclusion (Kinda liked it) and it's a guilty pleasure. It's got flow in a sea of crap but still, it's a manga where you don't need a brain to enjoy and it's there if you want to take a break from your more intelligent, sensible, less raunchy manga.

A little ecchi nonsense story you can use to kill some time. (like 30 minutes.)Boobies, funnies and complete randomness.Really, not much else to say I guess...Except to avoid if you don't like nudity that happnes just because the artist could.