Combatants Will Be Dispatched! - Reviews 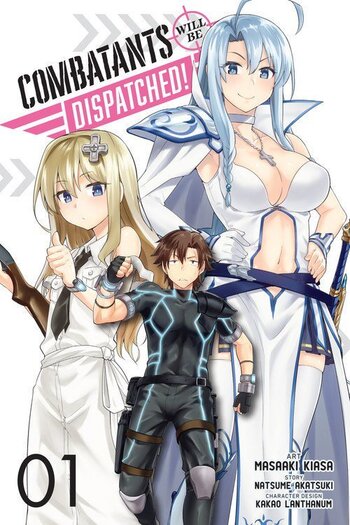 I can definitely appreciate the humor of this series. Combatant Number Six is mischievous, horny, and dumb and feir attitude and outbursts create some genuinely funny moments. And having the idea of fem wanting to rack up Misdeed Points makes it so there's always the possibility of fem doing something somewhat inappropriate or lewd (like flipping skirts) in any given situation. You see, fe works for an evil organization and they use Misdeed Points as a way to measure feir success at being "evil." Fe ends up in a situation where fe's leading a small military unit (made up of quirky characters) in a certain kingdom's fights against the demon king and other stuff. The tactics fem and feir android partner, Alice, come up with are usually underhanded and lacking in any honor (which can be pretty funny). Characters' personalities feel somewhat fluid, where they'll emphasize certain traits over others depending on what the current plot calls for. The first ten chapters are a bit more fresh and fun, whereas the chapters after that start to feel a bit more hollow and aimless. They still include some funny moments, but I don't like how it starts including some pseudo-heroism and sappiness.